Does delaying airport expansion cost us £6 million a day?

Delaying a decision about which runway to build costs the UK economy £6 million every day.

Whether or not you agree that a delay in the decision is imposing unnecessary costs on the UK economy, this probably isn’t the best estimate of what those costs are. Any precise figure will be uncertain.

The idea behind this kind of assessment is to suggest how much all the future benefits from an investment project are worth at the time of the decision. Benefits that come further away in the future are treated as if they’re worth less. The point is to decide, in financial terms, which project gives the most benefit for the smallest investment.

A peer review of the findings, also commissioned by the Airport Commission, emphasised the difficulties in predicting the impact of a new runway on the UK economy, and cautioned against attaching ‘significant weight’ to the report’s final figures

The British Infrastructure Group, a cross-party group of MPs, has taken the Airport Commission’s valuations and used them for a different purpose.

The figures suggested by the British Infrastructure Group aren’t so much ‘costs’. This isn’t money that has to be paid every day until a decision is made.

They’re based on predictions which include all the opportunities the UK could miss out on in the future if it doesn’t have a new runway, and judgments about what those missed opportunities will be worth.

So it’s better to treat the estimates as judgements caveated with a reasonable degree of uncertainty, rather than facts.

By focusing only on the economic benefits, the British Infrastructure Group has also ignored the predicted costs of each airport expansion proposal.

When these are factored in, the Airport Commission suggests that the overall social benefit balances out to between about £5.5 billion and £10.8 billion for a new runway at Gatwick, depending on how strictly carbon emissions are controlled. They suggest a net benefit of between £1 billion and £10.2 billion for an extended runway at Heathrow and between £1.4 billion £11.8 billion for a new runway at Heathrow. So it suggests the net benefits from expanding Heathrow would be more sensitive to how carbon emissions are controlled than expanding Gatwick.

Arguably, these bottom-line figures don’t give the full picture either.

First, looking at the net benefit to the economy overall won’t tell you who wins and who loses.  For example, the report suggests that passengers would enjoy cheaper travel and a better service if any of the projects went ahead, whilst aviation businesses would suffer lower profits. Particular places or industries would also do better or worse from each proposal.

Second, a range of opponents of the third runway at Heathrow have questioned whether certain negative consequences had been given enough consideration, such as environmental costs, noise pollution and public health concerns.

Arguably, the report is using the Airport Commission's original estimates in a way they aren’t meant to be used anyway.

The Commission gave a figure for the present value of each investment. This is a way to compare options - to make a judgement about all the benefits that will stem from an investment and sum up what those future benefits are worth to us right now, at the time of the decision. The British Infrastructure Group have treated the same valuations as if they show the value added to the UK economy by each investment, which isn’t the same thing.

Dividing up present value calculations may not give you a good idea of the costs that come from putting off an investment project. To start with, the value assigned to benefits in the far future are reduced down in present value calculations. If the British Infrastructure Group had used figures for the value added by each project as their starting point, they might actually have suggested a higher number.

This still might not have been a very good estimate for the cost of delay. Investment projects often have one-off benefits that won’t be reduced by a year’s delay, as the British Infrastructure Group acknowledges. Delaying building-work also delays the costs of future repair-work - a runway built one year later, for example, might be expected to last one year longer. The strategic benefits of increasing capacity ahead of the UK’s rivals may matter more, but these considerations aren't included in the figures.

The Airport Commission has said that it also depends on whether the UK tries to meet its carbon emissions targets by strict ‘carbon-capping’ or more flexible ‘carbon-trading’ systems, which they think would restrict the growth of businesses less.

That means there are at least six alternative suggestions for how much the future benefits from a new runway are worth to us right now, looking forward over 60 years. These are considerably reduced if we factor in the costs as well. 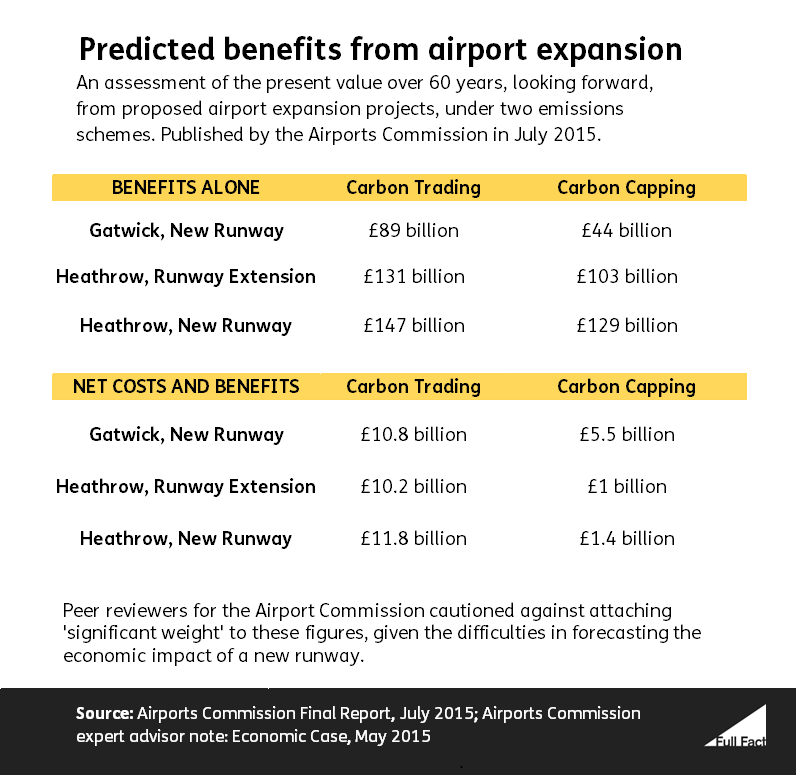 The estimates don’t account for every effect that comes from building a new runway. For example, the Airport Commission didn’t factor in how construction work on the runways will affect GDP, because they think it’s too hard to judge how much investment spending will be drawn away from other places in the economy, or exactly how the aviation industry will grow.

The British Infrastructure Group agreed that you could debate the costs of a delayed decision up or down, depending on which factors you considered.

The Airport Commission’s peer reviewers concluded that although the report was useful for considering the strategic reasons behind airport expansion, it shouldn’t be assumed that the final figures for the economic impact are reliable.

No decision has been made

The Airport Commission recommended the Heathrow Airport northwest runway proposal as the best option, although this wasn’t an uncontroversial decision.

The government has said that the decision will now need to be reviewed in light of the EU referendum result and that they will continue looking at the different options.

This article was updated on 8 August 2015 to incorporate a dicussion about the Airport Commission's suggestions for the net present value of each project, and a note from the Commission's expert advisors on the findings.