Was the EU referendum “advisory”?

The EU referendum was “advisory” only.

The referendum wasn’t legally binding, but there’s plenty of scope for argument about whether politicians should feel obliged to implement the result anyway.

“This was not an advisory referendum”

Given that the meaning of the French Revolution is still contested, it’s no surprise that there are arguments over June’s EU referendum.

The word “advisory” crops up a lot in the debate at the moment. Here we’ll look what people mean when they say that the referendum was, or wasn’t, advisory.

Start with the law

The referendum was not legally binding. There’s no one source that can prove this statement true (although here’s a respectable one). That follows from the fact that the European Union Referendum Act 2015 didn’t say anything about implementing the result of the vote. It just provided that there should be one.

In other countries, referendums are often legally binding—for example, because the vote is on whether to amend the constitution. The UK, famously, doesn’t have a codified constitution.

A UK referendum will only have the force of law if the Act setting it up says so. In practical terms this would mean someone would be able to go to court to make the government implement the result. The Alternative Vote referendum in 2011, for example, was legally binding in this way.

Otherwise, as the High Court put it on 3 November:

“a referendum on any topic can only be advisory for the lawmakers in Parliament”.

So, purely as a matter of law, neither the government nor Parliament has to do anything about the referendum.

Some people who oppose Brexit take the argument a step further. We see images like this one on social media, highlighting the non-binding nature of the vote: 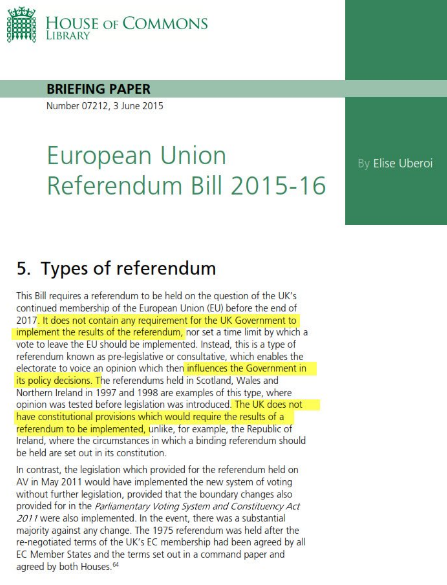 “Which bits of this [briefing] are MPs now acting as if they either did not read or did not understand?” asks the philosopher AC Grayling.

The arguments aren’t just legal—there are political ones too

This is where the argument slides from legal into political. Former diplomat Brian Barder says that:

“members of parliament owe the electorate their own best judgement of the national interest—taking into account the referendum result—not their obedience to the opinions of a narrow majority in a referendum or otherwise”.

The argument goes that, the referendum being “advisory” and Brexit being bad, MPs should refuse to follow the result. Some MPs agree.

But some people who support leaving the EU say there’s plenty of evidence that the referendum was politically binding. They say that the referendum process sent clear instructions to MPs that they should support the decision made by a majority of voters—even if the formalities don’t require them to.

They point to the fact that, during one of the debates on the referendum bill on 9 June 2015, the then Foreign Secretary said “decision about our membership should be taken by the British people, not by Whitehall bureaucrats, certainly not by Brussels Eurocrats; not even by Government Ministers or parliamentarians in this Chamber”.

Similarly, the government’s leaflet to all households advocating a Remain vote told voters that it would implement the result. This promise, too, does the rounds on social media. 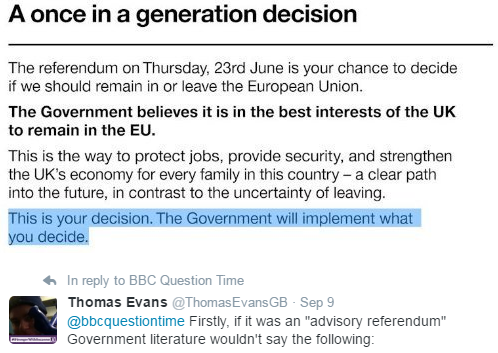 Leaflets are not law, and the High Court has since told the government that it can’t keep this promise without the approval of Parliament. But that doesn’t stop anyone from making the case that MPs delegated the Brexit decision to the voters, and have no right to unmake it now.

A representative or a direct democracy?

In the end, the argument comes down to different visions for democracy in the United Kingdom. The conventional view is that ultimate political power lies with Parliament. The High Court came to its conclusion that the referendum was not legally binding guided by “basic constitutional principles of parliamentary sovereignty and representative parliamentary democracy”.

In a parliamentary democracy, as barrister Rupert Myers bluntly puts it, “the people are not sovereign”.

That’s why Nigel Farage, for example, accepts that the referendum result was technically advisory only, but says that “I would now wish to see constitutional change to make referendums binding”.