Is that actually true?

Back in March, the director of the International Fact Checking Network, Alexios Mantzarlis posted a tweet with this image - an attempt to explain the relationship between fact-checking, verification and debunking. 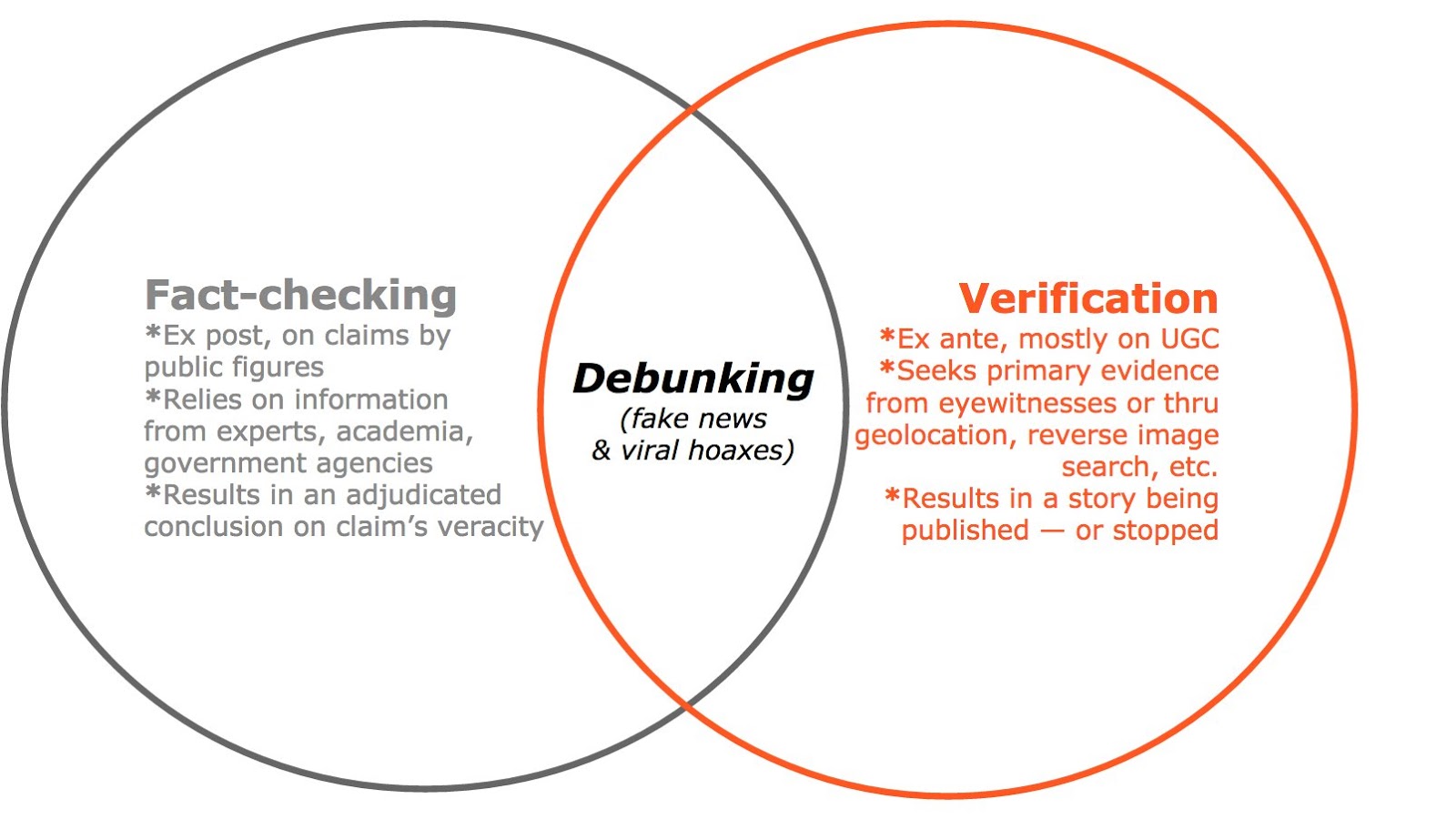 We don’t like to think that these websites caused us to re-evaluate what we should have recognized a long time ago, but certainly in this age of disinformation, this is not the way to organize our work. The audience just doesn’t think in this way. Audiences want to know what is true or not.

These are the sorts of questions people have:

Is the data being referenced by Labour on NHS spending levels on IT infrastructure correct? Is that screenshot of angry face emojis during Theresa May’s Facebook Live video actually from yesterday? I’m seeing lots of Corbyn related posts on Facebook about the election. I’m not sure what or who to believe?

What we learned during the French elections

When First Draft ran the CrossCheck project in France, we used a form on Hearken so audiences could ask the Project Editors questions. We made it clear that people could ask us about rumours they were hearing, claims from politicians they wanted to check,  and dubious-looking images or videos they wanted authenticated.

We got over 600 questions, and one clear lesson from the project was that we needed more fact-checkers to work alongside our visual verification specialists.

At the beginning of May, Claire Wardle, who is normally based in New York, happened to be in Europe as First Draft’s CrossCheck project in France geared up for the finale. Full Fact offered Claire a desk, and, as we all know, Skype or Hangouts are no substitute for sitting alongside others. As it was just two weeks after Theresa May’s announcement of a snap election, we decided we would try and work on a project related to the UK election that finally would bring together the disciplines of verification and fact-checking.

So in one week, we managed to recruit a team of eight ‘First Draft’ journalists who are sitting in the Full Fact offices next to their team of fact-checkers (after an emergency trip to IKEA to get more desks).

We also managed to very quickly set up a sophisticated monitoring system using a mixture of technologies: CrowdTangle, Google Trends, Newswhip, Trendolizer, Trendsmap, and Signal, as well as building numerous lists to monitor content and conversations on Twitter, Facebook, YouTube, Reddit and online forums. We collaborate on Slack and track our verification and fact-checking efforts on Check.

How we can help you

Every morning we’re sending out an email to newsroom partners based on what we’re seeing in conversations online. What is starting to trend? How do online conversations differ from the mainstream news agenda? In the afternoon we send out another newsletter highlighting ‘stories’ based on misleading or incorrect information or content circulating online.

As we learned with CrossCheck France, we don’t want to give oxygen to rumours or fabricated content that is not getting attention or engagement online, but when we see that misinformation might trend, we want to alert newsrooms, who have the ability to debunk or reference it in their output.

Already, First Draft journalists are realizing the level of work that goes into fact-checking policy-related claims, and the skills required to assess the data from governments and think tanks. Full Fact’s factcheckers are fascinated by the sophistication of the technology that allows them to monitor where politicians’ claims end up online, and how they can be received and manipulated.

It’s clear that many of the memes, misleading or false stories need the same level of scrutiny that Full Fact applies to political claims in the traditional news. And Full Fact, having been doing this work for seven years, has a database full of fact-checks that can be deployed in response to rumours or false claims circulating online.  Currently, the Full Fact team doesn’t have the expertise to find or track these but the First Draft team does.

At the end of the project, we will be writing up our systems and processes in the form of a ‘handbook’, as a way of building on CrossCheck France. We will also publish some reflections on working in the middle of Alexios’s Venn diagram. Is it possible, and how do we build these sorts of teams in a sustainable way?

This project is supported by Google News Lab and Facebook.

Why has the predatory bird monitoring scheme gone to ground during the election?