It has never been possible before to reach millions of people in this country without the other millions seeing it. Compare this to pre-internet advertising, where most adverts were in theory visible to anyone, for example in a newspaper, on TV, or on a billboard. Only direct mail offered anything like the same degree of targeting and relatively lack of visibility.

Dominic Cummings, Campaign Director of Vote Leave, illustrated this in one of his post-EU referendum blog posts. He was writing about Vote Leave’s online advertising strategy during the campaign:

“In the official 10 week campaign we served about one billion targeted digital adverts, mostly via Facebook and strongly weighted to the period around postal voting and the last 10 days of the campaign. We ran many different versions of ads, tested them, dropped the less effective and reinforced the most effective in a constant iterative process.”

It is remarkable and helpful that Mr Cummings shared this information (we don’t know the equivalent about the Remain campaign). However, we should not be relying on the openness of individual campaigners to know what information is being disseminated by parties and campaigns prior to a vote.

As non-partisan factcheckers, our concern is that inaccurate information could be spreading with no-one to scrutinise it.

Democracy should be done in public and that includes online political advertising.

We’ve made this point in media interviews recently, and in our written submission to the House of Commons Culture, Media and Sport Committee’s inquiry on fake news.

Already in previous elections, the scale of direct mail used by some parties was massive and gave rise to similar concerns. In 2010 Labour, for example, spent three quarters of its national election expenditure on direct mail, and made 8.3 million mail deliveries. The Conservatives sent 16 million items of mail in their campaign.¹ The principle remains the same, and the need for transparency about political advertising during elections is only becoming clearer.

So we are explaining how we plan to approach Facebook advertising during this election.

Who we're trying to reach

Facebook allows you to pay for adverts to appear in people’s newsfeeds. This is what it is happening when you see ‘Sponsored’ above a post, like this: 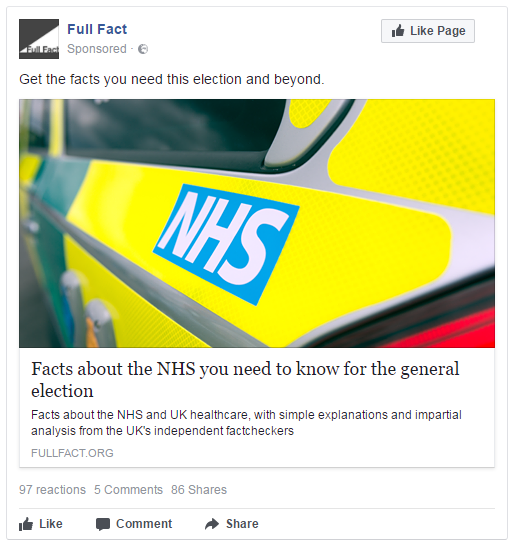 Rather than sending adverts out to people randomly, you can choose to target people based on certain criteria so they are more relevant. This includes things like location, age, interests, and websites people have visited.

In order to bring facts to people on issues they care about, we will be targeting people who are interested in a particular issue, such as the economy. To do this, we’ll target people based on the Facebook Pages they have liked, and whether they’ve visited a certain area of our website, such as our economy hub page.

We’ll also be explaining what Full Fact is, by reaching out to people who might be interested in factchecking. We’ll target these adverts based on people who have liked relevant Facebook Pages, and people who have been to our website.

Full Fact’s mantra is ‘play the ball, not the man’. We factcheck claims, not people. We will therefore be focused on bringing relevant facts to people. We won’t be calling out individuals for false claims.

Full Fact is independent and non-partisan. We don’t care how you vote. We will therefore target people based on topics rather than political allegiances.

Who's paying for it?

Facebook. They have donated £50,000 worth of advertising credits to Full Fact for the 2017 election as part of their commitment to tackle False News. Facebook does not have any say in how we spend them.

We will publish what we put on Facebook, and who we target it at, so everyone can see it.