The best way to tackle misinformation is to understand as much as possible about where, and how it spreads.

In this series, our Research Manager Amy Sippitt takes a look at some of the latest findings and updates about the spread of misinformation and the culture of factchecking.

Researchers have repeatedly questioned the idea of filter bubbles in social media.. 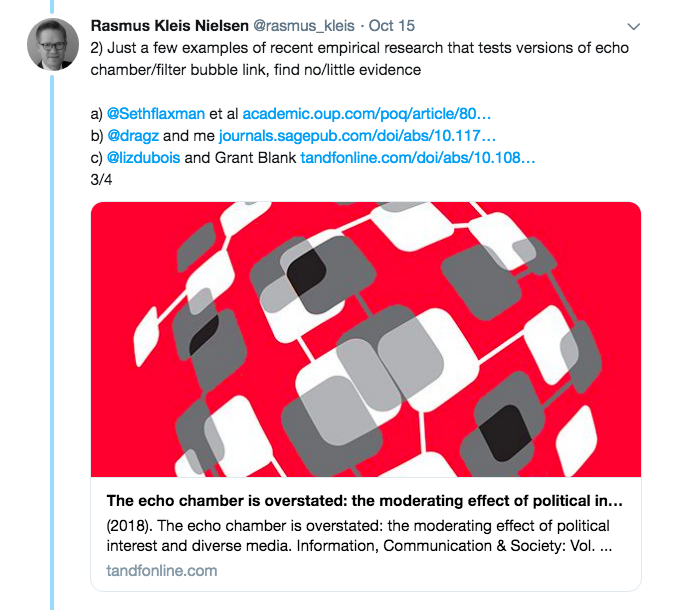 Research by Gordon Pennycook and David Rand testing belief in "blatantly inaccurate news headlines" suggests that people who are more analytical (i.e. do better in a cognitive test) are better at discerning false news from real news. That is the case regardless of whether that news aligns with their political ideology—and actually they were better at identifying false news if it did align.

So they conclude that it's more "lazy thinking" i.e. a lack of analytical thinking that causes people to be susceptible. This contrasts with previous research from Dan Kahan that more analytical people are better able to argue for attitude consistent interpretations.

Caveats:
The articles were more on the extremes of plausibility—it may be that this finding is not so strong with more nuanced news (e.g. a Republican-consistent false news headline tested in the study was "Election night: Hillary was drunk, got physical with Mook and Podesta").

They say more work is needed to understand when analytic thinking trumps motivated reasoning and when it doesn't - e.g. with climate change it might not work because people are less able to understand the science themselves.

They also say the fact that they asked people to assess fake and real news may have caused people to be more analytical than they would have been.

Sample: Around 3,500 MTurk participants in the US, in January and July 2017.  MTurk isn't nationally representative, but they say the sample may be more representative of people who most frequently come across news online.

Who shares (US) factchecks?

Analysis by Michelle Amazeen, Chris Vargo and Toby Hopp of nearly 800 politically interested US citizens found 11% of this group had shared a factcheck on social media—more likely on Twitter (11%) than on Facebook (6%).

People who valued journalistic evaluations of issues were more likely to post rating scale factchecks over non-rating "contextual" factchecks. It's not clear if this might also be related to the origin of the factcheck, given use of rating scales varies by the outlets of factchecks.

More to understand on immigration communication

NIESR have published an analysis of experimental focus groups they ran with 105 participants in a Leave voting area in the UK with relatively high levels of concern about immigration.

They tested out ways of getting people to consider economic evidence about immigration, including asking participants to use active listening, playing devils' advocate and writing a short defence for a policy which would benefit migrants. They also screened a fact-based video, summing up available evidence.

None of these methods made much difference to attitudes, finding that participants placed personal experience and anecdotes above statistical evidence. Participants thought the positive messages of the video revealed bias. But they say all is not lost: participants showed a desire for more discussion around immigration, and in a follow up survey around half said they thought they'd learned something from the video.

Digital media literacy skills, photographic skill and prior attitudes may have the biggest influence on how people assess fake images

Misinformation during 2016 US election

Knight Foundation study of 700,000 Twitter accounts that linked to more than 600 misinformation and conspiracy news outlets in the month before the 2016 election (outlets being those on an OpenSources list of outlets identified as having published stories found to be false or conspiracy). They identified more than 6.6 million tweets by these accounts to fake news and conspiracy news publishers in the month before the 2016 election.

Just a few fake and conspiracy news sites accounted for most of the fake news spreading on Twitter. But fake news still received significantly fewer links than mainstream media sources - receiving about 13% of Twitter links than a comparison set of national news outlets.

Previous How to series: a guide to factchecking the internet

Next How to understand the Budget – without the spin

We aim for our fact checks to be as accurate and up-to-date as possible. If you think we've made an error or missed some relevant information, please contact us.