Playing the long game: the impact of fact checkers on public figures, institutions, and the media

Politicians, public institutions and the media face different incentives for accountability. Many media houses have a policy, at least in theory, of correcting errors, and rarely receive negative reactions for doing so. By contrast, recognising an inaccuracy can be considerably more delicate for elected officials. Sometimes, public figures admit to getting it wrong. In many instances however, inaccurate claims are repeated over again, despite overwhelming evidence to the contrary.

This briefing was designed to take us beyond the fact check, and explore how we can apply pressure to institutions and society as a whole to harbour a culture of accuracy.

A small but promising evidence base

An experiment conducted in the US one month before the 2012 election, found that legislators who had been sent letters warning them of the reputational consequences of making inaccurate statements were also less likely to be found making them in practice. Researchers assigned 1,200 legislators to three groups. One group received a letter which explained the process of fact checking, outlining the risks of making inaccurate statements. This was the “treatment” group. The second “placebo” group was sent a letter noting that campaign accuracy was monitored in general, with no mention of fact checking. The third “control” group received no letter at all.

Researchers found that participants in the treatment group were half as likely to be questioned by PolitiFact or media outlets. Though the rate of inaccuracies was low across the board, 1.3% of legislators in the treatment condition had their accuracy questioned, compared to 2.8% in the placebo or control groups.

Admittedly, the evidence base informing this briefing is small. The study described here is the only peer-reviewed experiment about the impact of fact checking on politicians that we identified. And yet, while we are a long way away from understanding the precise contexts in which interventions work effectively, this experiment and a number of qualitative studies with public figures indicate that there is good reason to take these impacts seriously, and to continue building our evidence base in this area.

How can fact checkers create a culture of accuracy?

Fact checkers can adopt a number of strategies. Apart from publicly exposing inaccurate claims through fact checks, they may contact the claimant pre-publication and during the research phase of a fact check, or seek corrections at source after publication.

Such engagements make it clear to public figures and their staff that their statements are being fact checked, with a potential to encourage more careful use of evidence in the long term.

Similarly, some fact checkers engage in more systemic interventions. Training with media organisations can prevent inaccurate claims from spreading. This can mitigate the deleterious effects of repetition, which we covered in a different briefing. Reaching out to public information providers can improve the supply of accurate and well communicated information.

There is no single intervention that works for everyone. Impact on public figures is likely to vary with the cultural, political, and information landscape of different countries.

We’d love you to read the briefing

And share your feedback. Every response will help us nuance our recommendations, and bring research closer in line with fact checkers’ needs. Email us at research@fullfact.org. 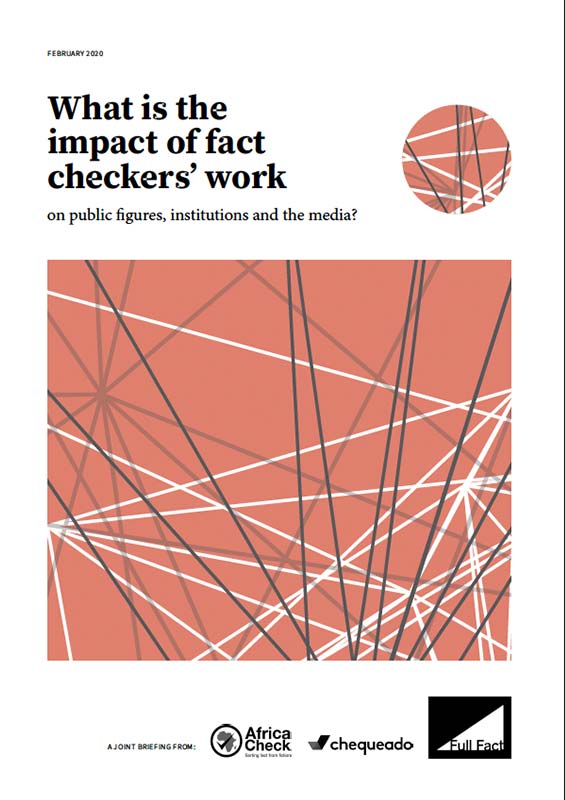 Sign up to our newsletter to keep up to date with our work.

Read more about this research programme.

Coronavirus: our pledge to you, our readers