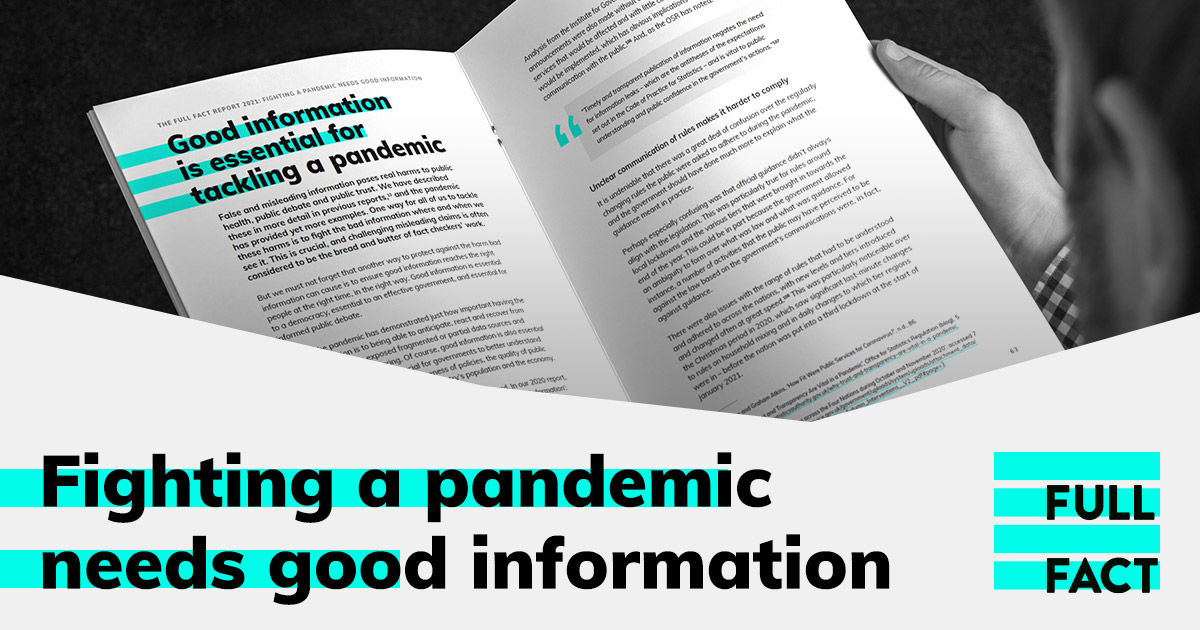 The pandemic exposed dangerous gaps in public data and communication systems - the government must act now to protect the public.

Almost a year ago to the day came reports that the first cases of coronavirus in the UK had been detected. Two months later, the nation was plunged into its first lockdown. We have all been asked to adapt to a new way of life. Many have lost loved ones, faced emotional and financial hardship, or seen the shape of their futures change in a flash.

Throughout, the public has been asked to place its faith in the government; to trust that, together with its advisors and the evidence being gathered, good decisions will be made. At the same time, the government relies on maintaining public confidence to tackle the crisis: it shapes what people are willing to do and how long they are willing to do it for.

Full Fact was set up to fight bad information, and we’ve been doing it for a decade. Over the years, we’ve seen everything from misused statistics to conspiracy theories, and we know that good information, used responsibly and communicated well, benefits public life and public debate.

The pandemic has hammered that message home. The public has a right to expect authorities to adequately collect, use and communicate the information it needs to manage crises. Crucially, it should do so with honesty, accountability and transparency.

Today Full Fact publishes a report based on our experience of fact checking the pandemic. While we found examples of good practice, the pandemic exposed dangerous gaps in public data and the government’s failure to live up to adequate standards of transparency and accuracy.

We’re calling for urgent action - including long-term investment and a Parliamentary inquiry - to help end the pandemic in 2021.

This is the second in a series of annual reports, supported by the Nuffield Foundation.

We didn’t get the information we deserved in 2020

Data that could have helped decision makers tackle the early stages in the pandemic wasn’t available. Gaps in adult social care data were known about long before the pandemic hit, but had not been filled. As academics have noted, this meant we lacked timely information, in a usable format, that could inform efforts to tackle the spread of the virus. Gaps also appeared during the pandemic, and we found a lack of detailed information on the supply and demand for personal protective equipment.

Early on in the pandemic, there seemed to be a systematic positive exaggeration of test performance by officials, and some targets seemed to have been designed in retrospect to ensure that they were hit. Most memorable perhaps is when the government pledged to carry out 100,000 Covid-19 tests a day but included in this figure tests at the point they were sent out - not when they were completed. Pointing out such discrepancies isn’t a case of gotcha politics. If the government is seen to be moving the goalposts, it cannot hope to earn the trust of the public, and cannot truly measure or improve its own progress.

Equally concerning was a consistent lack of transparency - for instance, the minutes from the Scientific Advisory Group on Emergencies went unpublished for too long and even when they were published, provided only limited information. Similarly, ministers or officials too often referred to information in the media, in parliament or in daily briefings without publishing the full data so the public and intermediaries could check for themselves. This is despite clear guidance from the statistics regulator and National Statistician. A failure to be transparent on the data and evidence informing the government risks undermining public confidence in fundamental parts of the government’s response.

Good communication from the government is essential during a crisis, both to reassure concerned citizens and ensure that official guidance is followed. But the thousands of questions we received from the public demonstrate an undeniable confusion over government guidance, with more than a third asking us how to interpret the new rules. On some occasions it wasn’t a case of leaving rules open to interpretation: we saw both departments and ministers issue conflicting and even incorrect advice during the pandemic.

A pandemic does not reduce the need for scrutiny of government decisions: when the stakes are so high, it increases it. For this, we require not just transparency in what is published, but also a willingness to engage with intermediaries - like the media or organisations like Full Fact - that seek to hold the government to account. We ask questions (sometimes difficult ones) but we also help the government to get its message out, and it’s essential that we can trust the information we are provided with.

We were disappointed at the way government departments handled our questions during the crisis. Responses were too often slow, unclear or inaccurate; Full Fact was told contradictory things and even faced an unwillingness to engage with questions of accuracy. Of the 12 requests we made to ministers about inaccurate statements related to coronavirus in 2020, only once was an attempt made to clarify the situation. The public deserves better.

Of course we recognise that there are significant pressures on the government, from ministers to communications teams, and that mistakes can and do happen, especially in high-pressure situations. But the way that errors are handled is crucial, not just in ensuring that the public gets the right information, but also as a way for the government to demonstrate that it is worthy of the public’s trust. It is incumbent on all those in public life to uphold the standards expected of them.

In many areas, essential changes to processes, standards and behaviours have been overlooked for too long. The pandemic has exposed some of these failings.

The crisis is far from over and there are already ample lessons the government can learn. It must work to ensure far greater transparency and accountability as it tackles the next stages of the pandemic, and to make fundamental changes that will lay the foundations for better use of data in public life - and ensure it is better prepared for the future.

Our report makes 10 recommendations that we believe will help improve the collection, use and communication of information in the UK. We urge politicians to be ready to show the data they rely on to others for scrutiny and to be transparent about how they will measure and track their progress towards stated targets. And we call for a public framework that clearly sets out how errors in public communications will be dealt with.

In the longer term, we have called for serious commitments to invest in public information and communications systems—to make sure we’re never again left so exposed in a crisis.

Low levels of public trust in those who seek to govern has been a chronic problem for years: the pandemic offers a turning point. The government must take the right path.