Bad information ruins lives. The online misinformation that has come with the pandemic has made this even more evident. We cannot go on relying on the internet companies to make decisions without independent scrutiny and transparency.

Full Fact has long called for the government to take action. Confirmation in today’s Queen’s Speech that the Online Safety Bill will finally go ahead is very welcome: good legislation and regulation could make a significant difference in tackling dangerous online misinformation.

But Parliament will need to scrutinise the Bill very carefully. Law and regulation for online safety must be balanced with the need to protect - and enhance - freedom of expression, and tackling misinformation shouldn’t just be handed over to a Government-appointed regulator.

That is why Full Fact is setting out 10 tests that we will use to judge the effectiveness of the Bill, once published.

For future rules to work, Ofcom will need strong powers to obtain real-time information from internet companies. The present government proposal for only an annual transparency report from tech companies is one of the inadequate proposals that must be addressed: retrospective reports don’t provide timely information when it’s needed by stakeholders to address online harms.

We think there is a strong case for initiatives that are not yet set out in the Government’s proposals, such as a Code of Practice on Misinformation.

The Online Safety Bill is a huge challenge for the government and parliamentarians to get right: well-meaning but poorly drafted measures could prove detrimental to individuals and society for years to come. And we should not forget that the behaviour that causes bad information and harm cannot be solved only with online policy.

Full Fact will publish a full analysis of the draft Online Safety Bill when it is made public.

The Online Safety Bill: What to look out for

The draft Bill has not yet been made public. But based on what we know so far, there are 10 areas that will need close scrutiny within Parliament and beyond:

1. The new law, regulations and associated measures must protect and enhance freedom of expression

The government must ensure that Ofcom and the internet companies pay due regard to protecting freedom of expression when complying with the new duty of care.

To prevent any chilling effect, there should be clear and consistent guidelines on the content which will fall in scope, developed in consultation with civil society and other experts.

2. The Online Safety Bill must commit to requiring action from the internet companies to tackle harmful online misinformation

We were pleased to see the government set out its expectation that misinformation is in scope of the duty of care in the Full Government Response, published in December 2020.

This must be followed through with commitments in Parliament, including that Ofcom will publish a misinformation Code of Practice that sets out detail on what types of misinformation content should be addressed and what best practice is recommended for tackling this content.

The government’s proposed exemption for news publishers and journalists will require close examination. For example, we have seen the harm that can be caused by sites purporting to be legitimate news and these sham sites cannot be excluded from the proposed regime.

3. The regulatory regime ensures effective and targeted action to address the most serious online harms

The Online Safety Bill seeks to address very serious harms such as serious illegal content and activity which threatens national security or the safety of children, as well as that which is not illegal but can still cause substantial harm.

The regulatory regime must be robust enough to be able to ensure that the internet companies take proactive, effective and consistent action to prevent these harms.

4. Careful scrutiny must be given to all the myriad of issues that will (or could) fall within the Online Safety Bill

Since the Bill was first mooted it has grown to cover a large set of issues and in an increasingly complex digital landscape—from how the government’s stated plans for an exemption in relation to news publishers’ own content to the independence of Ofcom, to how online abuse might be addressed, to increasing meaningful transparency from the internet companies.

The legislation and regulatory regime is a jigsaw with an overall picture that is far from clear. Each element will need scrutiny in its own right and often how it fits in with other elements (or indeed whether it should be included at all).

5. There must be open and transparent processes for accountability built in at all levels of the regulatory regime

Firstly, Ofcom must have sufficient powers to be able to hold the internet companies to account and to improve the ability of the government, Parliament and the public to scrutinise their actions.

Secondly, while it will be important that Ofcom is, and is seen to be, fully independent, Parliament must be able to be satisfied that Ofcom is fulfilling its duties effectively.

The Online Safety Bill must build in some flexibility for Ofcom and the internet companies to respond to future harmful activity and content as well as seek to tackle the issues that we already know about. Part of that will be building in processes that builds a robust and useful evidence base that enables targeted and proportionate responses in the future.

7. Much of the details of how the legislation will work in practice should be clearer before the Bill is passed

The Online Safety Bill will leave a lot of how the new regulatory regime will work to secondary legislation or to Ofcom to develop in the future.

While practical in terms of flexibility to amend in changing contexts, if some of this detail is not provided when the Bill measures are being debated, it will make it hard to judge how well the intended regime is likely to work in practice. To make the Bill as effective as possible DCMS will need to set out details in draft form before opportunities to amend the Bill close.

8. Parliament should carefully consider the potential for unintended consequences resulting from the new regulatory regime

Many issues expected in the Online Safety Bill will have measures proposed around them which could undermine solutions to other problems. This underlines how important pre-legislative scrutiny will be as well as what happens through the passage of the Bill.

It will be incumbent on those considering and putting forward proposals to think through unintended consequences and the potential for a regulatory regime to be abused.

9. UK legislation and regulation must be seen in the international context

As well as potential negative consequences in the UK, such risks also need to be seen globally: UK legislation can and does affect what happens internationally and will likely do so around regulating the internet companies.

With effective regulation, the UK could have a positive impact internationally and the UK could benefit by looking at measures that could be brought in from other contexts.

Given what the internet is, and the global reach of the internet companies and their platforms—as well as attempts good, bad and inadequate to regulate by other countries—an international lens will be vital.

10. The process must be inclusive and diverse with citizens and civil society participation both as the legislation is developed and in the resulting regulatory regime

Significant and continuous debate in Parliament and beyond with the public is needed on these measures given the potential wide-ranging implications. The process should be inclusive and diverse to make sure the resulting regime reflects the concerns of the public. 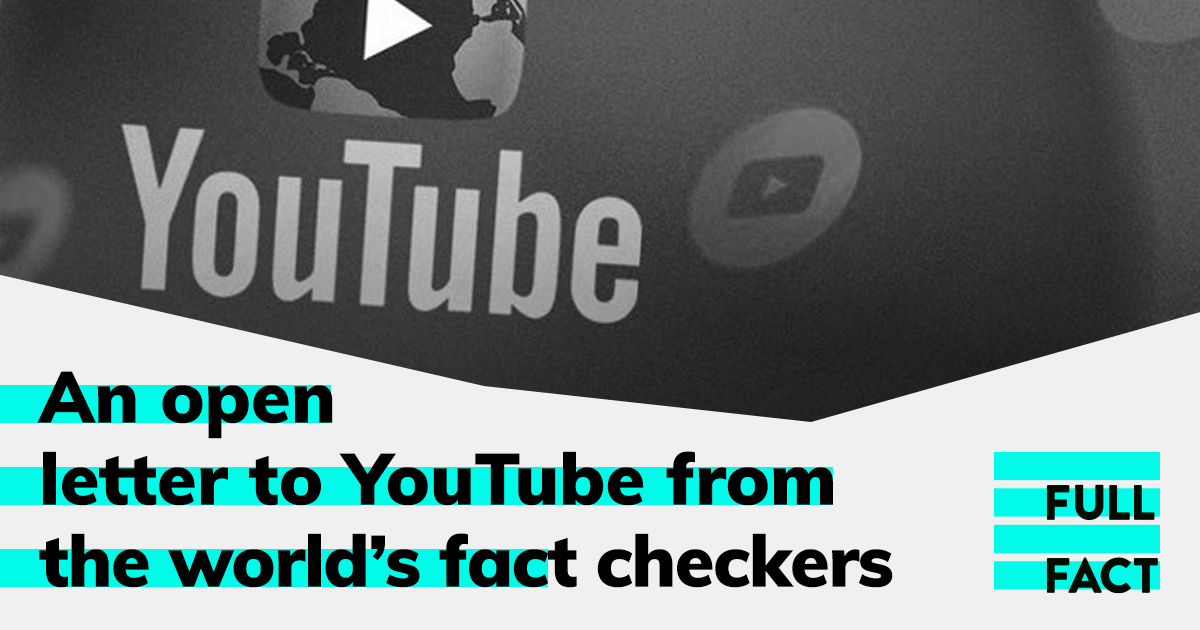 Why good statistics are so important for fact checkers