Primary school children are being used to carry drugs.

Reports from police in England and Wales to the National Crime Agency suggest in 42% of forces children as young as 12 are being used, but we can’t confirm yet if there are younger children involved as well.

“What is happening is that primary school children are now being used to carry the drugs because they are relatively unobservable.”

There is some evidence that children are being used in the drug trade, but we can’t confirm yet if any are as young as Mr Cable claims.

The National Crime Agency (NCA) said in 2017 that “Children as young as 12 are being exploited by gangs to transport drugs into county markets, store and distribute them to customers.”

Speaking to police forces in England and Wales between October 2016 and June 2017, the NCA found that 42% of forces “specifically reported evidence of children ‘running’”—class A drugs and money—for criminal networks between cities and rural towns. The youngest child reported to the NCA was 12 years old, a little older than primary school age.

Media reports suggest that children as young as nine are being used by gangs to distribute drugs—we’re looking into this.

Overall offences recorded by police in England and Wales relating to trafficking drugs have increased slightly in the last year. There were over 25,000 in the 12 months to September 2017, an increase of 1% compared to the year before.

Recent improvements in the way the police record crime may mean that some of this increase is only down to more offences being recorded, rather than more offences actually happening.

Between 80% and 90% of all drug offences relate to possession rather than trafficking of drugs. 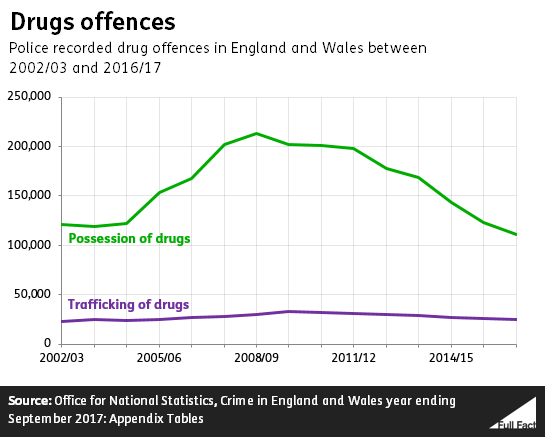