Are more people being prosecuted for carrying knives?

Correct. The number of offences involving possession of article with blade or point has been increasing in England and Wales since 2013/14.

More people are being prosecuted for carrying a blade.

Correct. There was a 12% increase in the number of prosecutions for possession of an article with blade or point in England and Wales between 2016 and 2017, to just under 9,000. It’s been rising since at least 2013.

People convicted for carrying a blade are spending longer in prison.

Correct. The average custodial sentence for a knife or offensive weapon possession offence increased by 2.2 months between 2008 and 2017.

“On the law enforcement side we’re catching more people carrying a blade, more are being prosecuted than ever before, and they spend longer in prison.”

Between 2016 and 2017, there was a 33% increase in the number of offences relating to possession of an article with a blade or point recorded by police in England and Wales.

There were over 17,000 offences involving possession of an article with a blade or point in 2017.

The number of recorded offences involving possession of a knife in England and Wales has increased in recent years, though some of this rise could be down to improved police recording and “targeted police action in relation to knife crime”. Before then, recorded knife possession offences were on a downward trend since specifically recording possession of knives was introduced in 2009.

Recorded knife crime generally has also been increasing and you can read more about that in our knife crime supercheck.

Prosecutions for knife possession offences are up

There was a 12% increase in prosecutions for possession of an article with blade or point offences in England and Wales between 2016 and 2017, to just under 9,000. That includes prosecutions against children.

The figures are for those prosecutions where possession of a knife was the defendant’s most serious offence if multiple offences are being tried. 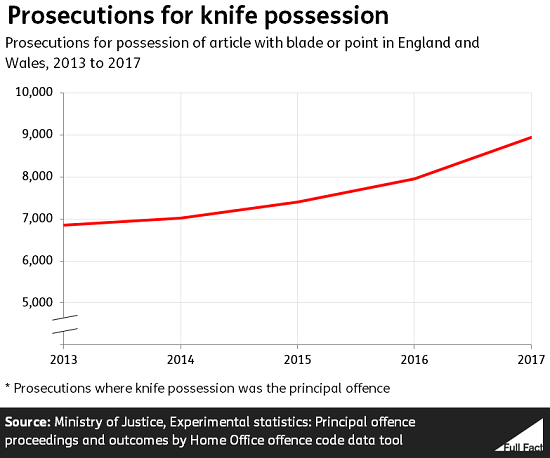 There was a 9% rise in the number of knife and offensive weapon offences—specifically those relating to possession and aggravated possession—that led to a caution or a conviction in England and Wales between 2016 and 2017.

A bigger proportion are given a custodial sentence for knife possession

The average custodial sentence for a knife or offensive weapon possession offence in England and Wales rose by 2.2 months between 2008 and 2017, to 7.5 months. 38% of offenders were sentenced to more than six months, compared to 20% in 2008.

In 2015, a new minimum sentence of six months was introduced for adults convicted of possessing a knife or offensive weapon for the second time or more.

Convictions are now more likely to result in a custodial sentence. In 2017, 63% of convictions of a knife or offensive weapon offence result in immediate custody or a suspended sentence, compared to 42% in 2008.