Cocaine use is at a nine-year high among 16-24 year olds in England & Wales. 6% had taken cocaine in the past year.

Correct, for England and Wales.

Britain has the highest rate of cocaine use among young adults in Europe.

We don’t have recent data for all European countries, but it’s likely – the percentage of 16-24 year olds in England and Wales who had taken cocaine in the past year exceeds all other countries we have data for.

For every gram of cocaine consumed, four square kilometres of rainforest are destroyed

Incorrect. This is a typo from a claim made in 2008 which said 4 square metres not kilometres of rainforest are destroyed for every gram of cocaine. This estimate doesn’t appear to be true in 2016.

“Home Office figures revealed that cocaine use among young people is at its highest level for a decade.

“Nearly 9 per cent of 16 to 24-year-olds had used Class A drugs in the past 12 months. Britain has the highest rate of cocaine use among young adults in Europe, their consumption being almost double that of other nations on the continent...

“For every gram of coke they put up their nose, four square kilometres of rainforest are destroyed.”

It’s correct that cocaine use among 16 to 24 years olds in England and Wales is at its highest level for around a decade. In 2017/18 6% said they had used at least once in the previous year.

The claim referred to Britain, but used data covering only England & Wales. We’re focusing on England & Wales as data for Scotland and Wales are not available for the most recent year. 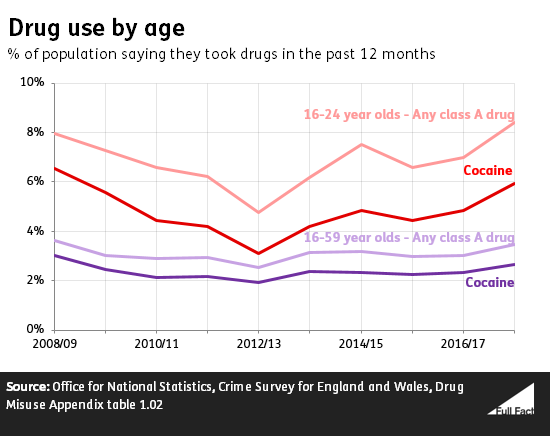 The data comes from a survey so there is a margin of error with the results. This survey covers households in England and Wales and so does not cover groups (such as those living in student halls of residence), who have “potentially high proportions of drug use”, meaning the true figure could be higher.

We can’t be certain, but it’s plausible England & Wales has the highest youth cocaine use in Europe

Comparing England & Wales to other countries in Europe is difficult because not all countries have up to date data.

The EU collates drug use data from 26 European countries and based on the latest data from each country, England & Wales has the highest cocaine use among 16-24 year olds.

Although though some countries’ drug data is old, cocaine use among 16-24 year olds in England and Wales has always been above all the other 25 countries for their latest data year. For example Finland’s latest data is from 2014, when 0.6% of 15–24 year olds had taken cocaine in the past year. In 2014/15 the figure for England & Wales was 4.8%.

However there are other countries in Europe with similar cocaine use to England and Wales. In 2017 4.4% of Danish 15–24 year olds had taken cocaine in the past year.

The claim that each gram of cocaine is the result of the destruction of 4 square kilometres of rainforest appears to come from a 2008 statement by the then vice-president of Colombia.

He actually said 4 square metres, not kilometres are destroyed for each gram of cocaine. The Times has since corrected their piece.

We’re not sure these figures  are still true, even if they may have been at the time. Colombia produced an estimated 866 tons of pure cocaine in 2016. Using the 4 square metre to gram conversion, that would suggest around 350,000 hectares of rainforest should have been lost in Colombia purely from cocaine production.

In fact, in 2016 Colombian newspapers reported that 180,000 hectares of rainforest were lost that year (according to official statistics). So around half the area as would be expected from the “4 square metre per gram” claim, and that assumes that cocaine consumed in the UK is of 100% purity and that all Colombian deforestation is due to cocaine production.

We have clarified that the claim about cocaine-related rainforest destruction was out by a factor of a million, not a thousand.

We have added the fact that the Times have now amended their piece with the correct figure of 4 square metres per gram.