This is based on homicides in England and Wales where it’s possible to say whether the victim and/or suspect was a drug user or dealer. As a proportion of all homicides, the increase is from 41% to 42%. We also don’t know the levels for any other years.

“Between 2014-15 and 2016-17, killings where either the victim or suspect were involved in using or dealing illegal drugs increased from 50% to 57%, according to Home Office figures.”

This is technically correct, but it doesn’t give us the full picture. The calculations only look at homicides in England and Wales where it was possible to tell if there was a drugs connection or not (roughly 75-80% of cases).

Looking at all homicides, including those where it wasn’t possible to tell if there was a link to drugs, the proportion of cases where the victim or suspect had a known drugs connection increased from 41% to 42% between 2014/15 and 2016/17.

The underlying figures behind this haven’t been published so we can’t look at the longer term trend, just the change between these two years.

This claim seems to come from the government’s Serious Violence Strategy, which was launched this week. The government says that “drug-related cases seem to be an important driver” of the rise in robbery, knife and gun crime, along with improvements in police recording—which it says are responsible for “about half the rise”. 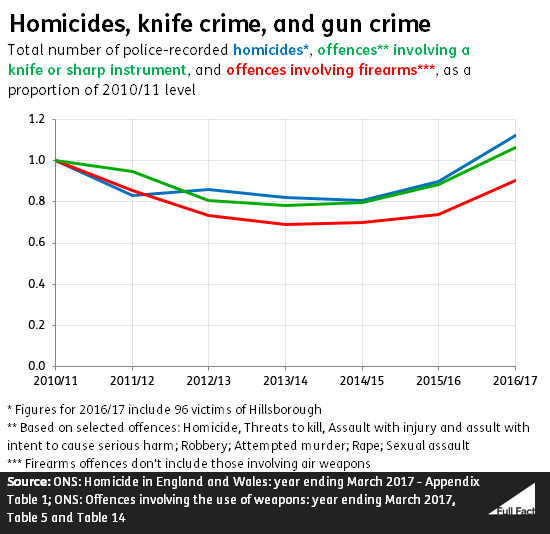 How big is the impact of drugs on these crimes?

The figures published by the Home Office can’t give us the full picture on what’s been happening to the number of homicides with a link to drugs in recent years.

The Home Office carried out bespoke analysis of figures from the Homicide Index for England and Wales (published by the Office for National Statistics) in November, finding that “Between 2014/15 and 2016/17, homicides where either the victim or suspect were known to be involved in using or dealing illicit drugs increased from 50% to 57%.”

But this finding is based only on homicides where it was possible to classify whether or not the victim and/or suspect was a drug user or dealer. It wasn’t possible to identify if there was a drugs connection in 18% of homicides in 2014/15 and 26% in 2016/17—and these homicides aren’t included in the overall calculations.

When we look at all homicide cases in those years, the increase in number of drug-related cases is smaller—rising from 41% to 42%.

There also aren’t available figures on how many drugs-related homicides there were in any other years. This makes it hard to determine whether the change between these years is part of a longer-term trend or not, and whether the number of homicides linked to drugs was unusually high or low in either of the years. The ONS has previously noted that the number of homicides does tend to fluctuate somewhat year-on-year.

There were around 6,400 offences recorded by the police involving a firearm in 2016/17, or about 9,600 including air weapons. There were 34,700 selected offences involving a knife.

Using the latest figures from the ONS, which publishes the Homicide Index, around one third of homicides involved a sharp instrument—such as a knife—in 2016/17 and 5% involved a shooting. These figures aren’t fully comparable with the Home Office figures though as they are more up to date, and also include 96 victims at Hillsborough as well as victims of terror attacks.

The ONS does not include data on the drug-status of victims and suspects. This information was produced specifically for the Home Office’s analysis, and we have only seen what they reported in their Strategy document. We’ve asked the Home Office for more information on its figures.

We updated this article to clarify the introductory paragraph.