4,000 EU prisoners in England and Wales

Taxpayers faced a bill of more than £140 million last year for criminals from other EU countries in British jails.

There were more than 4,000 foreign criminals from other EU countries locked up in British jails last year.

This is how many prisoners in England and Wales at the end of 2017 were citizens of other EU countries.

“TAXPAYERS faced a bill of more than £140million to keep more than 4,000 foreign criminals from other EU countries locked up in British jails last year, figures revealed today.”

At the end of 2017 there were just over 4,000 EU nationals in prisons in England and Wales. That’s around 5% of the overall prison population—the same proportion as for the last five years. The total number of EU prisoners dropped by around 100 in 2017 compared to the year before. 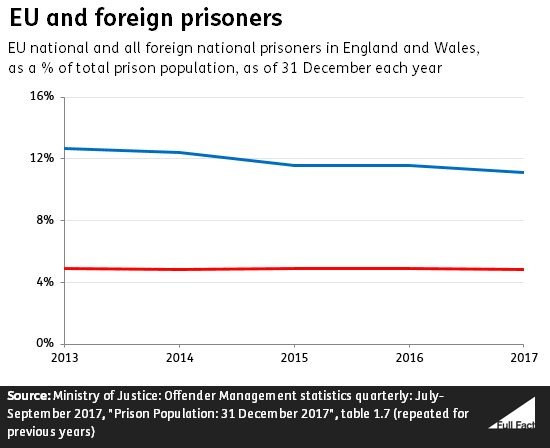 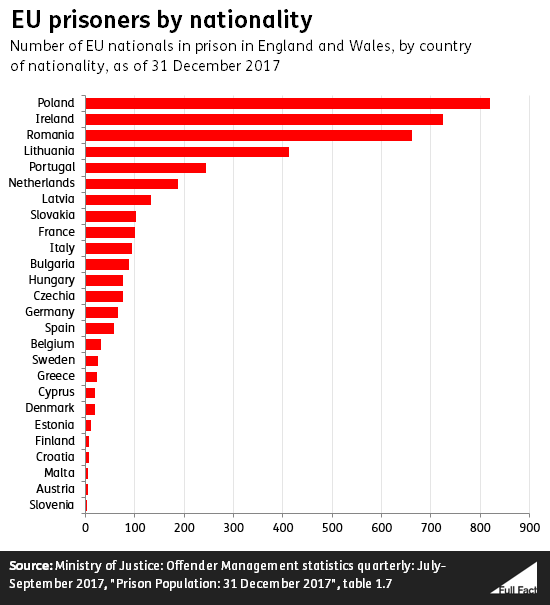 We’re looking at publicly available data from the Ministry of Justice (MoJ). The Daily Express’ data comes from an MoJ response to a Freedom of Information Request it submitted, which we have not seen. As a result the exact figures may differ slightly.

The prison population includes those serving sentences (87% of all prisoners, of all nationalities), those on remand awaiting the start or continuation of trial or a final sentencing (11%), and those held for civil offences and immigration detainees (1%).

The Daily Express’ cost estimate seems to be based on multiplying the number of EU prisoners by the average cost per prisoner in 2016/17.  We’ve asked the Daily Express for more information about this.

The Ministry of Justice told us that these are only an average, and costs per prisoner can vary across different prisons.  Things like the type of prison, its security level and the mix of prisoners it holds can all have an impact on the cost. The MoJ told us it only provides averages for the cost of prisoners across the whole prison system.

The average cost used by the Express also covers both public sector and private sector prisons, but the MoJ says that “public sector & private sector costs are not directly comparable because of differences in accounting treatment and scope of services”.

The average also includes spending at the national and regional level, not just spending at individual prisons.

We’ve asked the MoJ for more information about costs per prisoner.