One in three girls in school uniform has been sexually harassed in public.

35% of 14-21 year-olds in the UK said they had experienced unwanted sexual attention or unwanted sexual or physical contact while wearing school uniform in public, according to a survey for Plan International.

“More than a third of girls in school uniform sexually harassed in public, survey reveals”

“One in three girls in the UK has been sexually harassed in public when wearing school uniform, a new report has suggested.”

This is based on a recent survey conducted on behalf of Plan International, a children’s rights charity. According to Plan, the survey found that “35% of girls wearing school uniform have been sexually harassed in public.”

1,000 women and girls in the UK aged 14-21 took part in the survey, conducted by pollsters Opinium, and were asked which of a number of things they had experienced while wearing school uniform in a public place. The participants could select as many answers as they wished.

35% said they had experienced either one or both of these things.

There were other options that the girls and women could select too. 33% said they’d received unwanted attention like being shouted at, stared at, being followed or received insults. 15% said they had been followed. 7% said they had been filmed by a stranger without their permission and another 2% said they had experienced “upskirting” (someone taking a photograph underneath their skirt).

43% of participants in the survey said they hadn’t experienced any of the examples of harassment and 2% didn’t want to say.

The survey was conducted in February and March this year and was weighted to be representative of UK women in this age group.

This data may not give the full picture in terms of experiences of harassment. The survey is based on self-reporting by individual women and girls, who may not always feel comfortable disclosing their experiences to a survey. 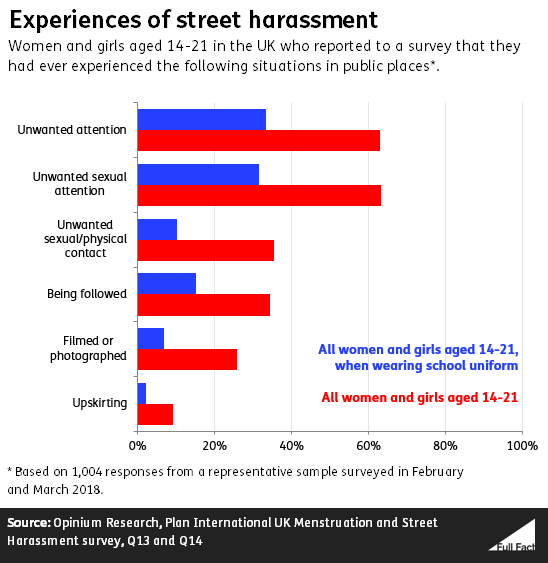 The pollsters also asked the women and girls taking part in the survey if they had experienced any of the above types of harassment at any time in public, rather than specifically when in school uniform. The question also gave examples of the types of location this might have happened in: “the street, on transport including taxis, travelling to school or work, in a park, bars or clubs”.

In all cases, a greater proportion of women and girls said they had experienced these harassment types at any time, compared to when they were in school uniform.

The survey didn't ask the women or girls anything about the people harassing them in public, or any more specific details about the kinds of location where it took place other than the fact it was in public.