Has the number of murders in London overtaken New York?

London overtook New York in murders in February for the first time in modern history as the capital endured a dramatic surge in knife crime.

Mostly correct. More homicides (not just murders) were recorded in London than New York over the past two months. Looking over the longer term the figure is generally higher in New York. There has been a surge in knife crime.

The total number of murders in London, even excluding victims of terrorism, has risen by 38% since 2014.

“London overtook New York in murders for the first time in modern history in February as the capital endured a dramatic surge in knife crime.

“The total number of London murders, even excluding victims of terrorism, has risen by 38% since 2014.”

It’s correct that in February and March, there were more cases of homicide in London than in New York City, but the number of homicides in both cities has been stable or decreasing over the long term.

The Metropolitan Police told us that there were 15 homicide cases in London in February and 22 in March, whilst in New York the NYPD told us there were 14 and 21 respectively. London and New York have very similar populations (8.8m and 8.5m respectively in mid-2016), so we can draw comparisons between the total numbers.

And looking at the number of homicides in the course of a year there were around 2.5 times as many in New York than in London in 2017.

It is slightly inaccurate to claim the number of “murders” is higher, as neither the NYPD nor the Metropolitan Police publish murder statistics, only homicide statistics, which include murders and manslaughter charges.

The claim that the capital has experienced a surge in knife crime is also correct. The latest figures from the Office for National Statistics for the year to September 2017 show a 21% increase in offences involving knives or other sharp instruments compared to the previous year, with the largest increase coming from London.

Looking specifically at homicides involving a knife, Home Office police record data shows that the number of offences in London increased from 65 to 76 over the same period.

Homicides have increased in London since 2014, but the numbers are roughly the same over a longer period

But looking over a longer term period, the number of homicides in London has remained steady at around 100 per year while in New York homicides have decreased considerably—from 515 in 2011 to 292 in 2017. 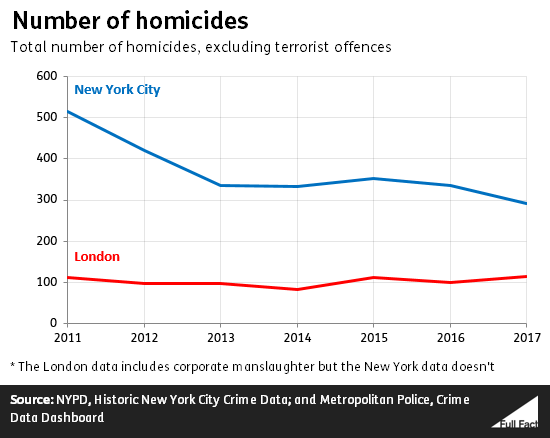 There are slight problems directly comparing the data from London to New York, because of the homicide definition mentioned previously.

While the police statistics include murder, manslaughter and infanticide within homicide, in New York homicide only includes murder and non-negligent manslaughter.

As the Metropolitan Police’s definition of homicide is wider than NYPD’s and it is likely to be slightly higher.

We corrected the conclusion to amend a typo which said London instead of New York.

We changed the conclusion to say that it was mostly correct that the number of murders had increased by 38% between 2014 and 2017. We also added the exact figures.