Have armed police numbers been cut?

There are about 700 fewer now than in 2010. Labour's claim accurately quotes the latest published Home Office figures, but newer figures from the National Police Chiefs' Council have changed the picture. The numbers are expected to return to 2010 levels over the next few years.

Fewer firearms officers, but training will push the numbers up again

This is correct on the numbers of police officers, covering England and Wales, but armed police numbers are likely to be about 700 down on 2010—the numbers have increased significantly in the last year.

There were about 144,000 police officers at the end of March 2010, just before the general election that year. The latest figures at the time, for September 2016, put that figure at about 123,000, down roughly the amount that Labour is claiming. These are full-time equivalent figures.

The number of authorised firearms officers in England and Wales was nearly 7,000 in March 2010, according to the Home Office, and their latest published figures as at March 2016 put it at about 5,600—a fall of over 1,300. So Labour’s press release is fairly quoting the published Home Office figures.

But those figures are for more than a year ago—and there’s been a drive to train more firearms officers since then. The National Police Chiefs’ Council (NPCC) says that has added around 640 more firearms officers in the last year, as well as 41 extra armed response vehicles, and more in the coming few years.

Once the training round is completed, the NPCC expects the number of firearms officers to be back over 7,000, similar to the levels at the start of this decade.

Not all of these officers are trained as counter-terrorism specialist firearms officers (CTSFOs) and the numbers on these aren’t readily available, but the NPCC says it is looking to increase the numbers of officers here.

The latest data supports the NPCC

The NPCC’s claim has since been supported by the latest Home Office data, published as at March 2017. This puts the number of authorised firearms officers at about 6,300.

The latest police workforce statistics also show that, for March 2017, the number of police officers remains at around 123,000. 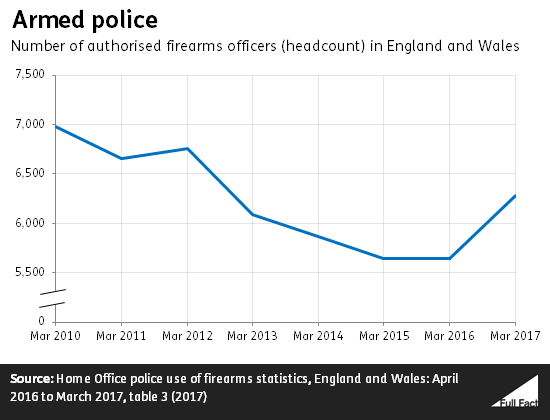 It’s not all about numbers

The NPCC’s lead for Armed Policing, Deputy Chief Constable Simon Chesterman, says that firearms officers are now better trained than they used to be:

“We now have the capability to deliver much more … we also have plans in place to mobilise the non-Home Office forces to give support to a major incident and – if needed – the military.

“We have the ability to move much quicker to resolve situations. Previously the approach was to locate, contain and neutralise. Now it is to locate and confront. Our tactics are more aggressive.”

The Home Office also cautions the numbers of firearms officers aren’t an exact measure of the police’s capacity to deal with incidents:

In March 2016 there were 3,888 counter-terrorism/Special Branch officers working in police forces across England and Wales. A year previously it was 3,733 officers. Again, these are full-time equivalent figures.

The Home Office have told us they didn’t give a specific number for how many counter-terrorism officers there are in the UK for national security reasons.

The latest data, for March 2017, also doesn’t publish the number of counter-terrorism officers for security reasons. It publishes a broader-level figure for those working in “National Policing”—5,696. This compares to 5,618 a year previously.

We've updated this article with the latest figures for March 2017.