Have more people died in stabbings and shootings this year?

More people have died this year through stabbings or shooting, and more young men.

We don’t have exact figures for this year yet. The closest data we have is for homicides involving stabbings in London until the end of last year and those involving stabbings or shootings across the whole of England and Wales in 2016/17. These show increases in the past year or two and more young male victims.

“Sadly an awful lot more people have died this year through stabbings or shooting, and more young men.”

We contacted the Metropolitan Police who told us that it didn’t generally give out an up-to-date running total on the number of homicides as these figures are published annually.

Separate figures on the number of homicides involving sharp instruments suggests that the numbers have stayed relatively flat since 2013/14 but increased in the first nine months of 2017/18 (the most recent figures available). We haven’t found similar figures for shootings.

Earlier this year the Metropolitan Police had told us there had been 38 fatal stabbings up until 20 April.

Looking at the whole of England and Wales the number of homicides involving a sharp instrument had generally been decreasing over the past decade, but the number has increased in the past two years to 215 in 2016/17 (the most recent figures available), up from 212 in 2015/16. 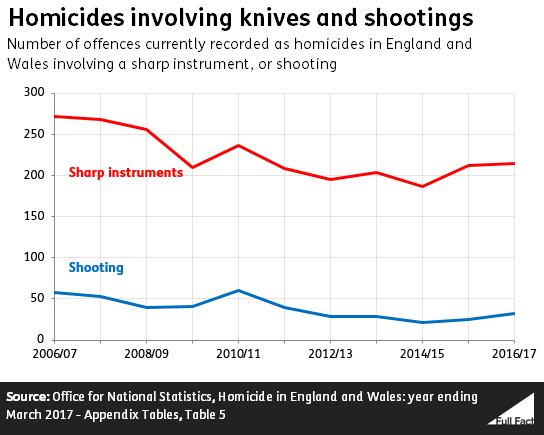 Around three-quarters of victims of homicides involving a sharp instrument in 2016/17 were male—and the majority of those were under the age of 34. The proportion who were male has increased in recent years, but is just below the level it was in 2007/08 (the highest recorded in the last decade). 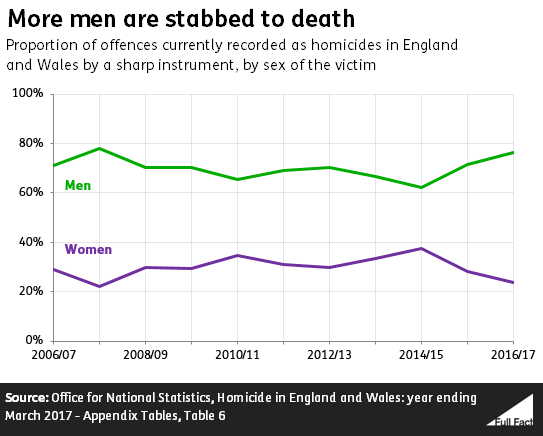 Over half of all victims of firearms offences in 2015/16 were between the ages of 15 and 34—not including air weapons and including all offences, not just homicides. Figures on the gender and age of the homicide victims who die in shootings aren’t regularly published.

Increases in knife and gun crimes recorded by the police are partly down to improvements in recording practices, but the Office for National Statistics also put this down to a genuine rise.