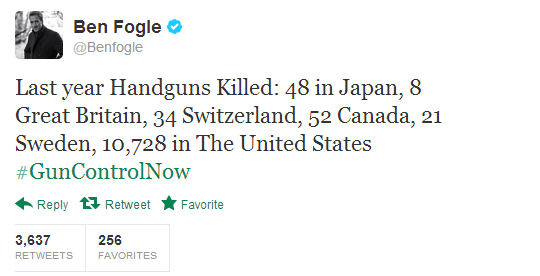 The next day however, Mr Fogle tweeted: "I have discovered the handgun fact wasn't from last year but the sentiments remain the same #GunControlNow."

Full Fact applauds anyone who promptly corrects a claim they have previously made when they learn differently, but where do these handgun statistics originally come from?

There are firearm homicides statistics available on the countries mentioned in Mr Fogle's tweet. The United Nations Office on Drugs and Crime (UNODC) provides homicide by firearms data (albeit incomplete) from 1995 to 2010. The most recent figures they quote for each country are:

These are quite different from the figures which went viral over Twitter although, as Mr Fogle notes, the 'sentiment' (the huge number of deaths by firearms in the US compared to everywhere else, even accounting for population differences) is still there.

However, we can do slightly better than the UN report by getting more up-to-date figures for some of the countries.

The latest data from the FBI provides a fuller picture of homicides by firearms in America, state-by-state (please note that there is no data for Florida or Alabama). In 2011, there were 12,664 homicides. In 8,583 of those cases, firearms were the cause, and 6,220 of those firearms were handguns. This is not quite the 10,728 figure that was quoted by Mr Fogle.

It's quite difficult to track down the original source, although a clipping from a newspaper in 1982 suspiciously contains exactly the same figures (missing out the no-longer existent West Germany):

The figure from the US is similar to the Bureau of Justice's figures for that year, although not exact. The true figure for the present day is several thousand fewer deaths per year.

In any case, this looks like a 32 year-old set of figures, and not one that should be repeated (or retweeted).

The most likely source of the confusion was this advert broadcast and printed in the early 1980s: It looks like whoever read this recently assumed that it was contemporary - that "last year" is 2011. In fact, the (very) smallprint on the poster sources the claims to 1979 statistics from the FBI. This much is confirmed by several news and academic articles from the US in the early 80s.

Of course, "West Germany" should have sent alarm bells ringing, as the New Statesman (who also spotted the dated figures) noted earlier this week.

This article was updated when the image went viral again.