Is the illegal trade in wildlife the fourth largest in the world?

"The illegal wildlife trade is now the fourth most lucrative transnational crime after drugs, arms and human trafficking. It is estimated to be worth between 10 and 20 billion dollars each year." Prince William, 12 February 2014

Prince William's role in promoting this week's symposium on international wildlife trafficking proved more controversial than expected when he was reported to have attended a hunting trip in Spain beforehand.

However he attracted more favourable media attention with his keynote address, with several, including the Daily Express, picking up his claim that criminal wildlife trading was the fourth most valuable illegal trade in the world.

The claim has been used by a number of different wildlife charities - including the WWF, the International Union for the Conservation of Nature and United for Wildlife (which is organising the London symposium) - although unfortunately, none provide a source for the statistic. We've contacted each group to ask for more details and will update when we receive a response.

Without seeing the research behind the claim, it's difficult to know what is being included in the 'illegal wildlife trade', and this could be crucial. The Anti-Corruption Resource Centre has said that:

The source for this version of the claim is a 2011 report by Global Financial Integrity, which estimated that illegal trade in wildlife was worth between $7.8 billion and $10 billion annually (the report's findings were also used by the UN Office on Drugs and Crime when it values the various illicit global markets). On its own, this placed it fifth in terms of value of the various illicit trades considered by the report, although taken together with illegal timber trading (worth $7 billion per year) and fishing (worth between $4.2-9.5 billion), it places fourth. 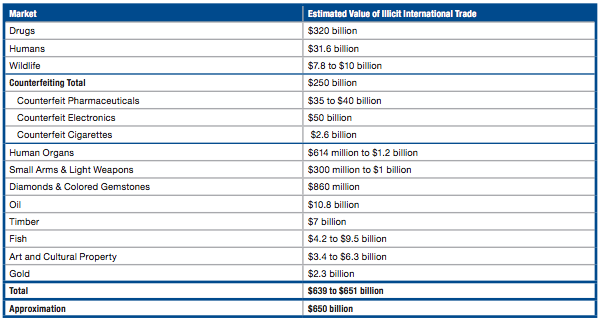 While the total value of the illicit trade in wildlife and its position in the list of the most lucrative illegal markets given here seems to roughly tally with Prince William's claim, the specifics are a little less clear.

Prince William places the illicit trade in arms above the trading of wildlife in terms of value, however the Global Financial Integrity report only looks at small arms and light weapons, whose value is relatively small. Instead, the report considers the trade in counterfeit goods to be considerably more valuable than the trade in wildlife, estimated to be worth $250 million.

This actually reveals another potential limitation with Prince William's claim: although criminal wildlife trading ranks fairly highly in a list of valuable illegal markets, it still accounts for a relatively small share of the total value. Even if we bundle wildlife trading with fishing and timber trading and take the upper estimate of each's value, it still accounts for less than 5% of the total worth of illicit international trade.

This is because the two largest illegal markets - drugs and counterfeit goods - account for nearly 90% of the total alone, according to these estimates.

While we haven't yet seen the research behind the claim being used by Prince William and various wildlife charities, the published evidence that is available suggests that he is at least in the right ballpark. This isn't surprising: the Global Financial Integrity report uses estimates done by many of the charities themselves to inform its own conclusion that the illicit trade in wildlife is worth $7.8 billion to £10 billion.

However whether this tells us much about the scale of the global criminal trade in wildlife is more contentious. Looked at in terms of their value alone, the illegal wildlife trade is dwarfed by the trade in drugs and counterfeit goods.