This is very likely to be wrong. It’s actually likely that more offenders are facing jail for offences involving possession or threatening with a knife. This claim is based on provisional figures which don’t include all cases that will result in jail sentences.

“There is no evidence in this data that the government’s new approach to tackling knife crime is having a positive effect. The number of offences is rising while fewer offenders are facing jail”.

New figures on sentencing for certain types of knife crime were released this week, prompting the shadow home secretary Diane Abbott to criticise the government, saying that the number of offenders is rising while fewer offenders are going to jail.

The number of these offences that are dealt with in the criminal justice system is rising, but it’s probably not correct that fewer offenders are facing jail. In fact it’s highly likely that more are, and a greater proportion of offenders are.

Ms Abbott is using figures that don’t show the full extent of prison sentences that offenders will face.

What the data shows

Labour put out a press release featuring figures from the Ministry of Justice showing that the actual number of people sentenced to prison fell from 8,050 in the year ending September 2018, to 7,728 in the same period in 2019.

These aren’t figures for all crimes that involve a knife—assaults and murders, for example, are counted separately and flagged as involving knives. The figures Labour is reporting cover possessing knives or offensive weapons (other dangerous weapons not including firearms) in public or threatening or endangering people in public.

That 7,728 figure is provisional—it doesn’t include offences which happened in that year but haven’t finished going through the justice system. Many will take several months to reach the sentencing stage.

The Ministry of Justice estimates this number will eventually reach 8,384 offenders—slightly higher than the 8,050 the previous year.

So it’s misleading for Labour to compare the actual number of offenders going to prison in 2018 and 2019, because 2019 figures are incomplete and will end up being higher. Labour should be comparing the 2018 figure with the estimated number for 2019, which will show the truer trend. 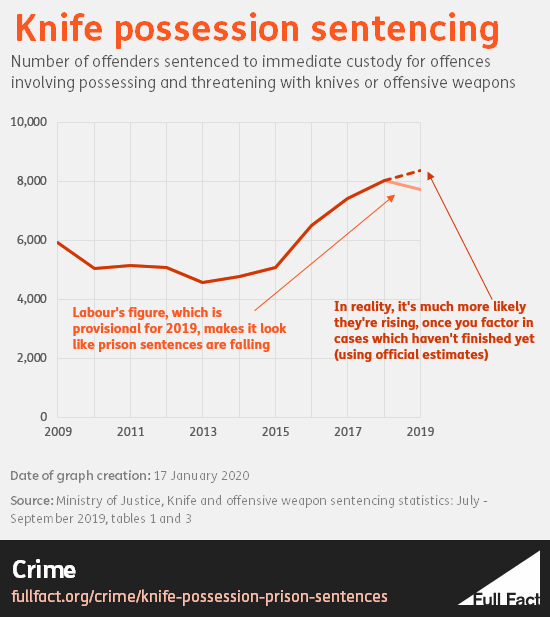 As has been reported widely, the comparable estimates indicate that offenders are more likely to face prison, with 38% estimated to do so last year compared to 23% back in 2009. That rate has been growing year-on-year.

Sentencing policy on knife crime possession has become stricter over the last decade, with a number of laws, judgements and guidance issued making it more likely that offenders receive prison sentences for longer.

It’s also worth noting that the increase in offences may partly reflect a greater use of stop and search powers unearthing knives people are carrying, rather than just more people carrying knives. We don’t seek to comment in this piece on the wider question of whether the government’s policies are having a “positive effect”.

We got in touch to request a correction regarding a claim made in The Labour Party.