Is the Ministry of Justice misrepresenting the cost of legal aid?

"At around £2bn a year we have one of the most expensive legal aid systems in the world. At a time when everyone has to tighten their belts, we can no longer close our eyes to the fact legal aid is taxpayers' money and it is costing too much."

Ministry of Justice, quoted in Guardian, 1 October 2013, (and previously)

"The government is deliberately misleading the public, quoting inaccurate figures to force through its proposed changes to legal aid."

"The figures we use are accurate."

Amidst the row over the Daily Mail's reporting of Ed Miliband's late father last week, another less widely-noticed clash was brewing over on the pages of the Guardian.

The leaders of the six regional circuits of the Bar Council wrote in to the newspaper to criticise the Ministry of Justice's (MoJ) "misleading" and in parts "inaccurate" portrayal of the government's legal aid reforms. This morning however the Justice Secretary showed he wasn't giving way to the criticisms.

We took a look at some elements of the dispute.

What we spend on legal aid

The government initially claimed the legal aid system in England and Wales costs £2 billion. This figure in itself doesn't seem to be disputed by the Barristers. 'Spending on legal aid' in this sense means spending by the Legal Aid Agency (formerly the Legal Services Commission) on defence services at police stations, magistrates', Crown and civil courts, as well as advice and help with speaking in court.

Sure enough, the best available figures published by the MoJ confirm last year (2012/13) £1.9 billion was spent on legal aid and most totals since 2007 have been near or above the £2 billion mark.

That's equivalent to about 23% of the Ministry of Justice's total budget of £8.6 billion. 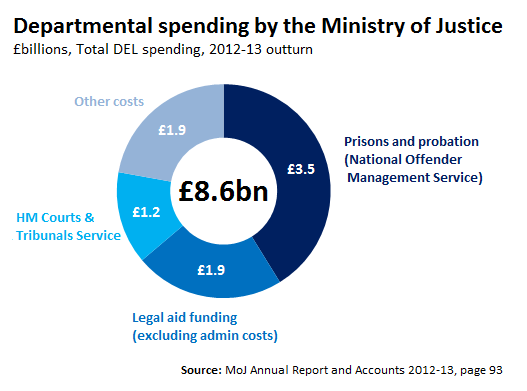 The agreement seems to end there. The Barristers instead attack the claim that the costs to the public are 'spiralling' - not actually made in the statement but previously by the Justice Secretary, in April this year:

"Under the previous government, the cost of the system spiralled out of control."

Figures for the years before 2007 aren't published in the latest MoJ release, but the Justice Select Committee has compiled the numbers back to 2000. Data here is missing for 2003, but King's College London have filled in the blanks: Overall, spending on legal aid rose by 3% (taking price inflation into account) between 2000 and 2010, although peaked in 2003 and has stayed fairly constant for the past five years.

It's difficult to see why this would be interpreted as 'spiralling', although it's also important to be aware of the factors beneath the surface. The cost of criminal legal aid (magistrates' and Crown court services) rose 9% compared to a 6% fall on civil cases. Even within criminal spending, Crown courts have seen year-on-year rises while magistrates' courts have seen the opposite.

The reason for these shifts is, as evidence to the Committee put it, mainly down to the volume of cases that go to court - so it's not entirely in the hands of the MoJ centrally. We've investigated the driving factors behind this previously.

How we compare internationally

It is, as the Barristers point out in their letter, difficult from the outset to go about comparing the cost of different countries' justice systems. Nevertheless, the European Commission made the attempt last year in its own review of justice systems across the continent.

In terms of public spending on legal systems, the Barristers point correctly to the Commission's measure of budget allocated to "all courts, legal aid and public prosecution", divided by the population. On this measure England and Wales comes in at 13th out of 41 states involved in the study. Above average, but not among the biggest.

Switch the indicator to spending per person purely related to legal aid, and England and Wales shoots up to 2nd place. Along with Northern Ireland and Norway, the legal aid bill for the top three spenders are far ahead of any other country.

This isn't a perfect comparison, as the Commission itself cautions, but it also only compares the systems per inhabitant rather than per case. The UK's tendency to have larger volumes of court cases overall will obviously have an impact on these outcomes, so they shouldn't necessarily be used to assess the relative generosity of legal aid systems for the people who actually use them.