“The Metropolitan Police commissioner included victims of the July 7 terrorist attacks when she said there were now far fewer murders in London compared with more than a decade ago.”

Following an appearance before a committee of MPs, Metropolitan Police Commissioner Cressida Dick was criticised for demonstrating the drop in homicides in London by comparing recent figures with figures which included the 52 victims of the July 2005 terrorist attacks.

Over the long term, the number of homicides in London has fallen since the mid-2000s, whether or not you include victims of terrorist incidents. 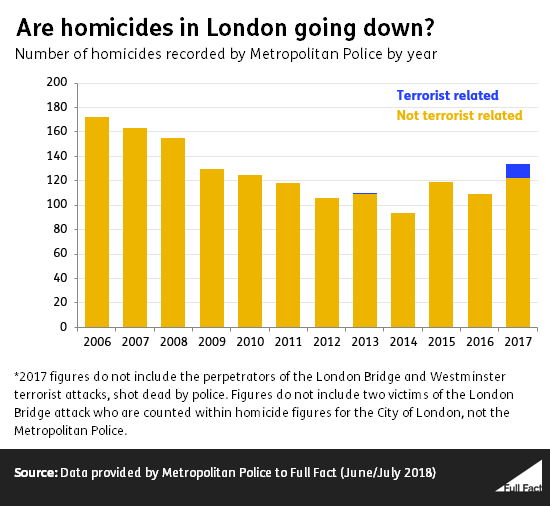 The data shows the number of homicides recorded in a given year, not necessarily the number that have occurred (homicides can in some cases occur in one year and not be recorded until a later year).

By way of comparison, a decade later, in 2016 there were 109 recorded homicides, according to the Metropolitan Police’s figures and in 2017 there were 134 homicides, of which 12 were victims of the Westminster Bridge, London Bridge and Finsbury Park attacks.