Is online abuse increasing while arrests are falling?

After it emerged yesterday that the Queen's speech will pave the way for legislation to make possession of so-called 'paedophile manuals' illegal, the Labour party issued a statement saying that more needs to be done to tackle online abuse.

The CEOP (Child Exploitation and Online Protection Centre) statistics to which they referred do show an overall increase in reports of child sexual exploitation - but reports of online abuse specifically decreased between 2011 and 2012.

The number of arrests relating to CEOP's work have decreased, as claimed, but we can't read too much into this. Prolific offenders have multiple victims, so one offender could be the subject of multiple reports.

Increase in referrals - but not for online abuse

Statistics relating to CEOP's work can be found in their annual reviews, but are not always available on a time series basis.

But these reports, which come from children or parents, or law enforcement or internet industry sources, include reports of 'offline' abuse too. CEOP published a report in 2013 which discussed online child sexual exploitation (OCSE) specifically - finding that reports of OCSE had decreased by over a quarter between 2011 and 2012.

So over the past two years overall reports have increased but reports specifically relating to online child sexual exploitation have decreased.

Still, an increase or decrease in reports may not reflect the same trends in actual abuse taking place - for example, CEOP told us a child might contact them if the child has put an image online that they're concerned about.

CEOP have also stated that "it is arguable that fluctuations such as [national campaigns, changes to legislation] reflect an increasing awareness and understanding of such crimes rather than a rise or fall in the number of offences being committed against children". 69% of reports received relating to online child sexual exploitation describe contact from an adult which failed to result in full offending at the point of reporting, as a result of victim vigilance - so again not all reports are necessarily resulting in offences.

The arrest figures do show the number of arrests to be lower for the past two years than the previous four years.

CEOP told us that we shouldn't read too much in trends in the arrests either, since their work is often about prolific offenders who have multiple victims (sometimes in their hundreds). So an increase in reports may not mean an increase in offenders. 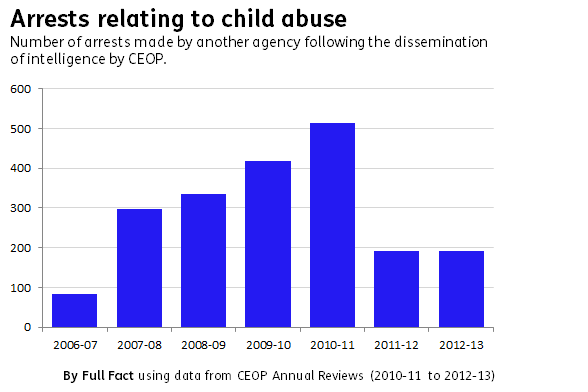 They also collect the figures through feedback from local forces in the UK and overseas relating to the intelligence that CEOP have provided - if the forces don't feed back to CEOP then their arrests aren't included in the figures, so we don't know if any arrests are missing.