These figures refer to the number of full time equivalent officers (or how many there would be if you added up all their hours to make full time roles).

The number of police officers in England and Wales is at close to the lowest recorded level since the early 1980s. 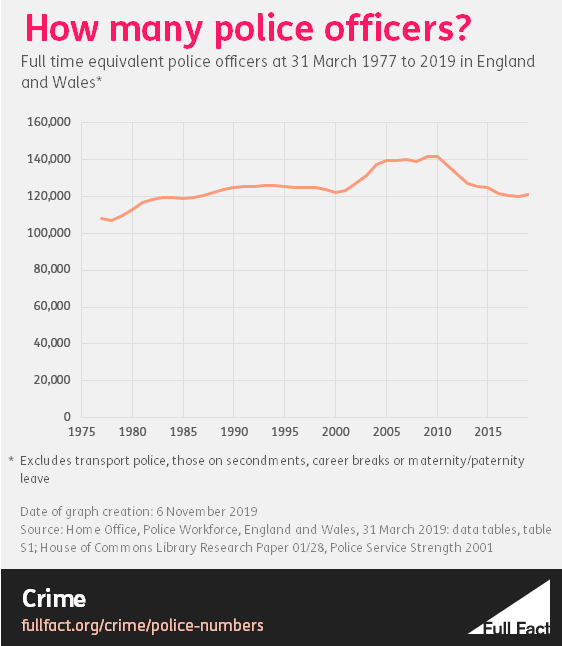 That drop of 20,600 represents a 14% fall since 2010. After accounting for the growth in population, the number of police officers per person has fallen by 19%.

Policing is local too, though. If you live in Merseyside, you won’t be directly affected by what’s happening to police numbers in Gwent.

The staffing picture varies across the 43 police forces of England and Wales. 27 forces have gained officers in the year to March 2019, with Kent Police seeing the biggest rise in numbers (a 9% increase). 16 forces have lost officers, with Surrey seeing the biggest drop (a 6% decrease). You can check your area by looking at table H5 here, and to compare with previous years A1 of this House of Commons Library research.

You might also care about the number of frontline officers. There’s no hard and fast definition of who fits that description. The official definition has changed several times. At the moment, officers are categorised as one of frontline (like response teams, neighbourhood policing and front desk roles), frontline support (such as intelligence), business support (such as training) or not coded (such as national policing).

Using that breakdown, there are an estimated 16% fewer ‘frontline’ officers since 2010. After accounting for population growth, the number of frontline officers per person has fallen 21%. 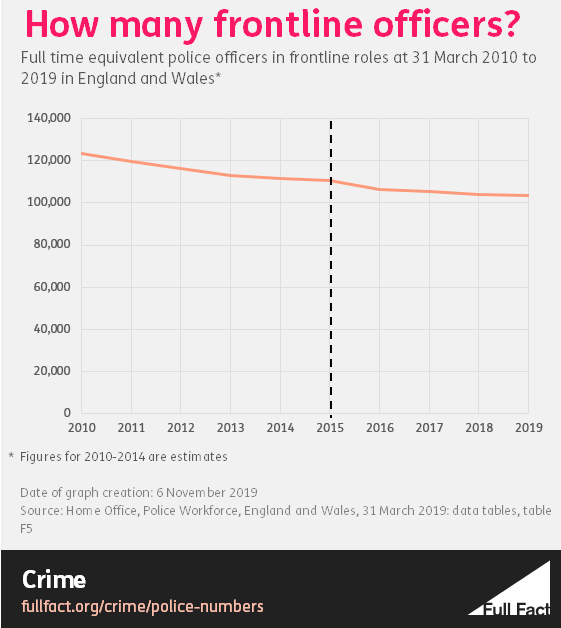 Again, that varies. Police forces structure and record their roles differently so it’s tricky to compare them directly, but in March 2019 Warwickshire police had seen a 45% fall in frontline officers compared to 2010, while at the other end of the scale, Surrey has seen a 4% increase.