Is the rising cost of alcohol behind falling violent crime?

A 'shock drop' in violent crime in England and Wales greeted readers of the Times this morning. They and others reported that falling rates of binge drinking and the rising cost of alcohol were to blame. The BBC was more circumspect, reporting that the research behind the figures said alcohol "might have played a role".

Today's figures aren't actually about how much overall violent crime there is. Instead, these are figures for people treated for injuries related to violence at emergency departments, minor injury units and walk-in centres across England and Wales. They showed a 12% fall in violent injuries between 2012 and 2013.

So these figures actually refer to the most serious violent incidents which result in injury. More than half of violent crime results in injury and 18% of cases are reported to result in some form of medical attention.

Not a shock drop

As long-term trends, go, this fall isn't a 'shock'. Hospital figures going back to 2002 show an almost consistent fall in the rate of violent incidents resulting in admissions, per 100 people. It's not clear how long this trend will continue.

The Crime Survey for England and Wales also measures violent crime via interviews asking people of their experience, and likewise has shown a falling long-term trend. Police recorded crime shows a similar trend, though this is a less reliable indicator.

The same trend has also been shown across other Western countries. 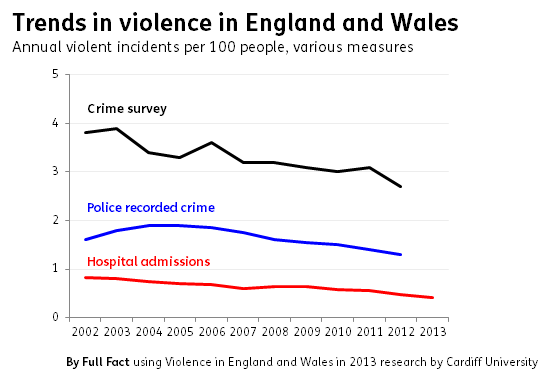 Is the decline of cheap alcohol behind the fall?

A number of papers credited the price and consumption of alcohol as the reason for the trends in serious violence. The research itself wasn't as explicit, and was reluctant to assign a single, even dominant, cause:

"Reasons for decreases in violence nationally are not clear, but are likely to be multi-factorial and complex."

One of the authors admitted that changes in alcohol habits were a "probable explanation" among others, as well as unemployment, poverty and inequality.

That said, the authors did point Full Fact towards research that supported the alcohol connection. Here are just a few: 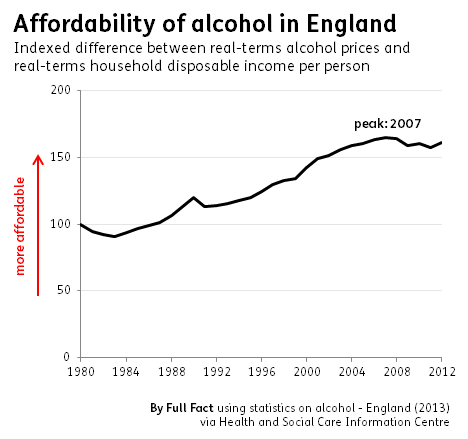 It's worth bearing in mind though that the trends in affordability of alcohol and violent crime haven't always followed this pattern.

Violent crime has been falling for over a decade while the drop in affordability is only recent. Similar research has found that attendance rates at hospitals didn't significantly change in the late 1990s is spite of the rise in affordability during that time.

Affordability isn't an ideal measure in itself anyway: people don't necessarily react straight away to a change in a product's affordability, and the actual consumption data on alcohol can provide a more concrete picture.

Alcohol consumption has been falling for longer, and more closely matches the trends in violent crime, but this doesn't show anything more than correlation on its own.