David Cameron will today announce reforms to the prison system in England and Wales. He's expected to highlight the "scandalous failure" of the prisons sector.

We've put together some factchecks of the key claims we've heard this morning.

That’s right for England and Wales: 46% of adult prisoners were proven to have re-offended within a year of release in the most recent statistics. The figure is 60% for people sentenced to less than a year. These figures are for people released between April 2013 and March 2014.

The overall rate of proven re-offending has remained stable for the past decade.

Re-offences don’t have to be as serious as the original offence. Receiving a caution in the year after release from prison counts as a proven re-offence in these figures.

While re-offending is highest for short-sentenced prisoners, this doesn’t mean short sentences are less effective on their own. The Ministry of Justice warns that figures for different sentence types “should not be compared to assess the effectiveness of sentences”.

“In a typical week, there will be almost 600 incidents of self-harm; at least one suicide; and 350 assaults, including 90 on staff.”

These figures are correct for self-harm and assaults in England and Wales; suicides are less certain. 2015 was the worst year on record for these incidents.

In 2015 there were 590 incidents of self-harm a week and 360 assaults including about 90 on staff. The rate of self-harm and assault incidents hit record levels in the year ending September 2015 as well.

The government’s figure for suicides is actually measured as “self-inflicted deaths”—this can include people willingly taking their own lives and accidental deaths. Self-inflicted deaths were at least one a week in 2015 and happened at a higher rate than has mostly been the case in the past ten years.

“This failure really matters. It matters to the public purse: this cycle of reoffending costs up to £13 billion a year.”

This figure comes from a National Audit Office (NAO) study in 2010. Back then the NAO estimated re-offending by recent ex-prisoners cost the economy between £9.5 and £13 billion in 2007/08.

This is a hugely uncertain figure. Versions of it date back to estimates by the Home Office in 2000 who called the practice of estimating the cost of crime “inevitably imprecise”. They suggested the cost of crime to society in England and Wales was around £60 billion, and it was later estimated 18% of this was because of re-offending by recent prisoners. That gave birth to the figures which have since been built upon to reach the figures we hear today.

It’s not difficult to see why it’s uncertain either. As the original researchers admit, it’s not at all easy to work out how much a crime costs society as a whole, and how you’d compare the costs of murder to wounding, or theft, or burglary. Even then, we don’t even have precise estimates of what crimes are even happening.

So we can’t place much confidence, at this stage, in a figure so old and uncertain.

“Over the last 25 years, the prison population has doubled”

The prison service is currently facing overcrowding. In 2014/15 almost 26% of prisoners were living in crowded conditions.

Overcrowding has existed across prisons in England and Wales almost constantly for the last two decades. 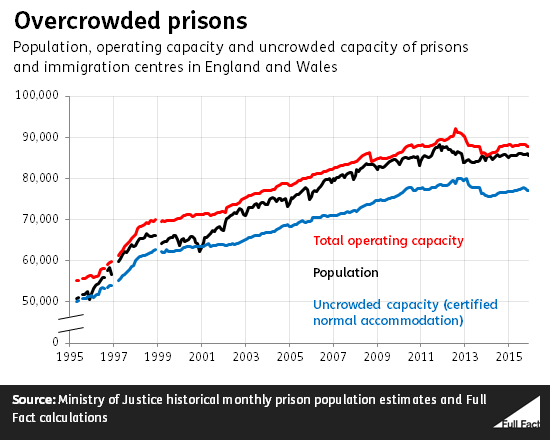