Stop and search: the racial imbalance

Stop and search powers exist across a range of legislation

There are three main Acts under which stop and search powers are exercised and recorded by the ethnicity of the people concerned:

This isn't a complete list: other legislation also gives police stop and/or search powers, although there's less information about how often and where they're carried out. This includes the the Firearms Act 1968, the Misuse of Drugs Act 1971 and via the Road Traffic Act 1988.

The overwhelming majority of stops and searches take place under section 1 of PACE 1984: 1.1 million were recorded in 2011/12. For these, a police officer must have 'reasonable grounds' for suspicion that someone has a stolen or prohibited item. Guidelines that exist for police officers set out broad rules for what counts as 'reasonable' grounds. 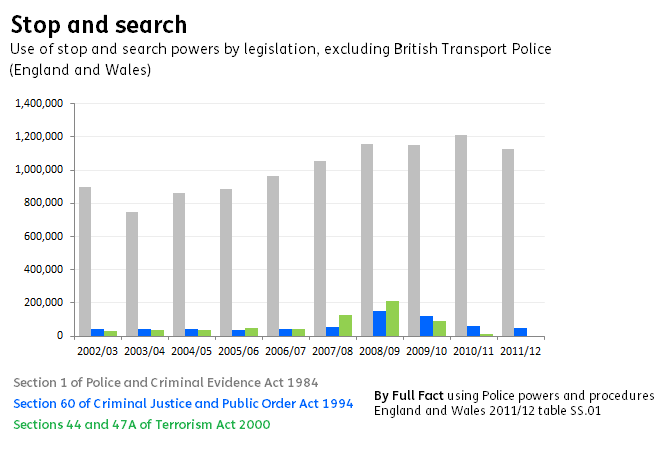 Last year 46,000 stops and searches were carried out under Section 60 of CJPO 1994: these happen on the approval of a senior police officer if it's suspected that serious violence could take place or that people are carrying weapons in a specific local area. They're intended to prevent violence at large-scale events such as football matches.

Section 44 of the Terrorism Act 2000 was scrapped in 2010, as a result of a legal challenge through the European Court of Human Rights. The Court concluded that the powers were not defined well enough and were susceptible to abuse. This has since been replaced with what the Home Office describes as a "more targeted and proportional power". There aren't any figures yet for people searched under this law.

The difference varies by local police force: in Dorset the ratio of black to white searches is 12:1. In Northumbria it's about even at 1:1.

People being searched report their ethnicity; this information is then used by the Ministry of Justice to compare how many people of different ethnicities are searched compared to estimates of the population by ethnic group.

Another ratio often mentioned is that black people are 29 times as likely to be stopped and searched as white people. This refers only to those 46,000 stop and searches which happen under section 60 of CJPO 1994.

The Equality and Human Rights Commission (EHRC) found last year that, for stops and searches under this act, black people were 29 times as likely to be affected. This also happens to be the same ratio as for the West Midlands - the most disproportionate local example.

But the Ministry of Justice (MoJ) advises against making this comparison for section 60 stops alone. It says:

"Because this specific stop and search power is only used at specific times, it is not appropriate to calculate rates per 1,000 population."

The problem being highlighted is that since section 60 stops tend to take place at large events with a chance of violence (such as football matches) the kinds of people who attend these events aren't necessarily representative of the local population.

It's also possible that people travel to large events from a wide catchment area and this also makes comparing the searches with the local population mix difficult.

Local areas can also yield misleading figures. In 2012 when the EHRC reported on the use of section 60 stops and searches, they confirmed to Full Fact that, while black people were 37 times as likely to be stopped and searched across England and Wales at the time, the most extreme example was in Gloucestershire where they were 177 times as likely.

They emphasised that this was due to the small number of stops that took place in these areas, combined with the fact that areas like these had predominantly white populations.