Violence and drugs in prison

The amount of times drugs were found in prisons across England and Wales rose by 23% in one year. 20.4% of drug tests came back as positive.

“The amount of times drugs were found in prisons across England and Wales rose by 23% in one year, Ministry of Justice figures reveal…”

Assaults of all types and self-harm incidents are up in prisons, as are positive drug tests, and the number of times drugs have been found.

There were just under 83,000 people in prisons in England and Wales at the start of August 2018.

More drugs are being found

The Ministry of Justice aims to randomly drug test 5% or 10% of prisoners in each prison every month.

Around 54,400 tests were administered in 2017/18. 11% of the results proved positive for “traditional drugs”, like cannabis, opiates, cocaine and methadone.

Positive tests for traditional drugs have risen slightly from 9% in 2016/17. This latest year had the highest proportion of positive results since 2004/5 when 11.8% were positive. 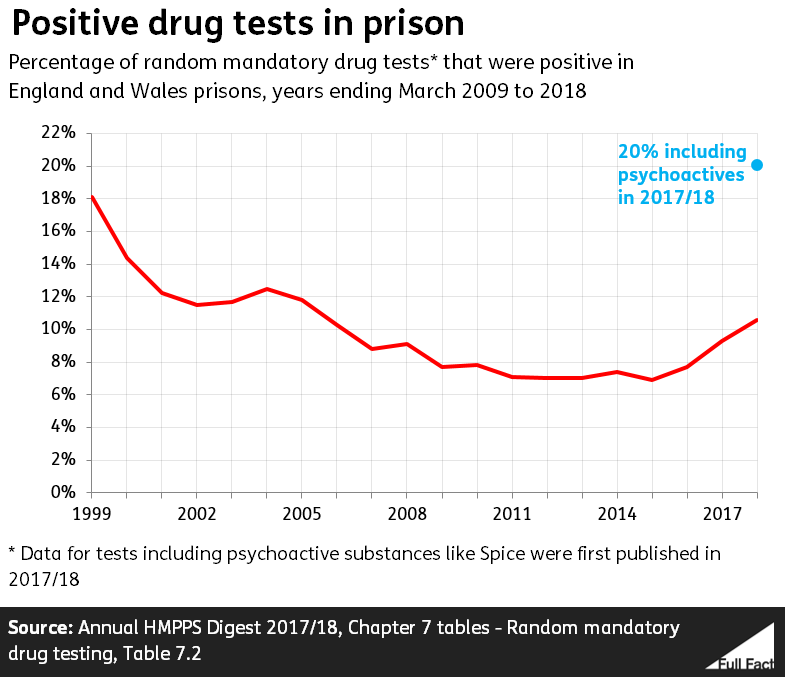 If you include positive results for psychoactive substances, like ‘Spice’, 20% of them were positive.

The random drug tests are mandatory—although a prisoner can refuse to take it and face a disciplinary procedure. Failing the test is a disciplinary offence, which could mean a longer sentence.

The number of times drugs have been found in prisons has increased over the last five years.

Psychoactive substances were also the type of drug found most often.

Assaults of all types are up

There were 31,000 assault incidents in prisons and state-run immigration removal centres in the year to March 2018. 22,400 of these were prisoner-on-prisoner assaults and 9,000 were assaults on staff.

There were 364 total assaults per thousand prisoners in 2017/18. That’s roughly the same as the number per thousand male prisoners, though for women (who make up about 5% of the prison population) it’s slightly lower.

There were 46 per thousand prisoners, of what the Ministry of Justice classes as “serious assaults”. This includes sexual assault, anything that results in being an inpatient at a hospital, concussion and other specific types of injury like broken noses and lost teeth.

For prisoner-on-prisoner assaults, there were 262 per thousand, and 106 assaults on staff per thousand prisoners. 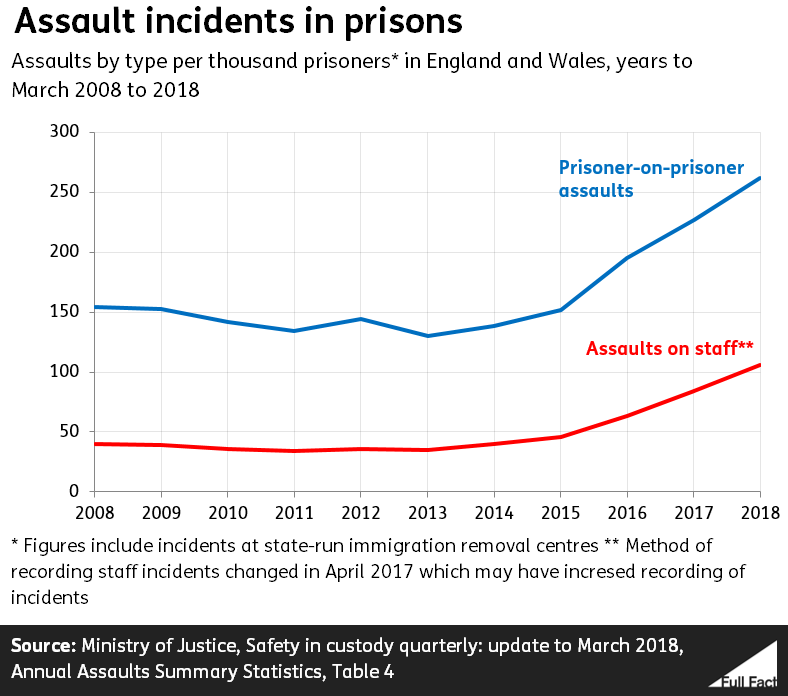 The Ministry of Justice changed how assaults were recorded in April 2017. It said this simplified how incidents involving staff are identified but it “is possible this has increased the recording of incidents”.

Self-harm rates are at their highest in ten years

There were 46,900 incidents of self-harm recorded in prisons in England and Wales in 2017/18, up 16% on the year before. Per day, that works out as 128 incidents. This is the highest it’s been over the last ten years, when this data series began.

Self-harm is defined as “any act where a prisoner deliberately harms themselves, irrespective of the method, intent or severity of any injury”. The figures may include some but not necessarily all attempts at suicide.

There were around 11,900 “self-harming individuals” in prisons overall. 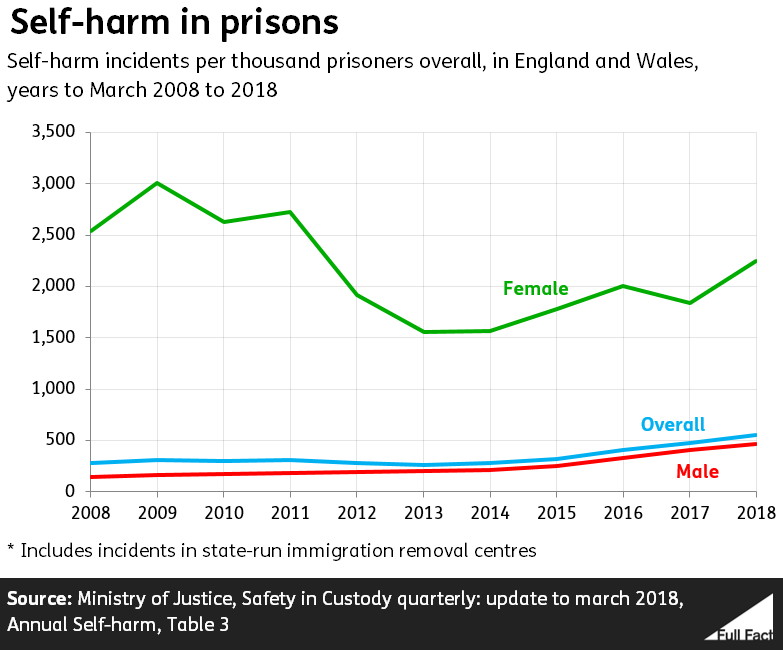