Violent crime is not at record levels

Violent crime is at record levels.

Incorrect. Several reliable sources indicate that overall violent crime in England and Wales is far lower now than it was in the 1990s. Police figures show violent crimes at their highest recorded level, but these are unreliable.

Knife crime is at record levels.

Police and hospital figures show knife crimes at or near their highest recorded levels. Knife crime is almost certainly rising at the moment, but no source is strong enough for us to be certain that it’s at record levels.

Never since records began have violent crime and knife crime been as high as they are today. This crisis is a consequence of nine years of Government cuts to the police and youth services. pic.twitter.com/H3T3kWEgfH

Louise Haigh’s claims are based on the number of violent crimes recorded by the police. It’s true that police figures show the highest ever recorded levels of violent crime and knife crime specifically, but it’s almost impossible to derive any trustworthy trend from this data, as police recording practices have changed significantly over time.

This isn’t to say violent crime isn’t rising—the evidence indicates some types of violent crime have begun to increase in recent years. But saying violence is at record levels is flatly contradicted by more reliable data.

Looking at knife crime specifically, police and hospital figures show knife crime to be at or near its highest recorded levels. Knife crime is almost certainly rising at the moment, but no source is strong enough for us to be certain that it’s at record levels.

Violent crime covers a broad range of crimes—from minor assaults (such as pushing and shoving) to murder.

Nobody knows exactly how many violent crimes are happening. Crimes are, by their nature, difficult to spot and count properly. That’s why we have several sources of information to help us. When it comes to measuring violent crime, three sources are most relevant:

All three sources have their strengths and weaknesses. The police data is generally bad at telling us anything about trends over time. Not only do they not record all crime that actually happens (some crimes often go under-reported to the police), they’ve been subject to a lot of changes over the years in how the police count the data. The one thing it is more useful for is for crimes that happen very rarely and cause a high level of harm, like knife crimes or murder. But even in the case of knife crime, it’s still very unreliable.

The Crime Survey is much better at telling us about trends, because it’s always had a consistent methodology and can pick up crimes that go unreported to the police. But because it’s a survey of households, it’s less useful for picking up changes in crimes which don’t happen very often, and doesn’t tell us anything about crimes against businesses.

Hospital admissions are tangible examples of the impact of serious violent crimes, and are valuable to look at alongside police figures to compare the two. But it’s only an indirect indicator—we don’t know how many of the admissions are actually due to crimes, not least because recording accuracy can still vary, and they don’t pick up lower-harm violence that doesn’t leave people in hospital.

According to the Crime Survey for England and Wales, violent crime peaked in 1995 and has fallen by over two-thirds since then. In recent years, those falls have largely flattened out.

Data from other sources backs up the Crime Survey

Figures from hospitals in England also show a falling trend since 2006/07. Back then, just under 46,000 admissions were recorded where the reason was believed to have been an assault (excluding sexual assault). By 2017/18, just over 28,000 such admissions were recorded. These figures only cover England, whereas the Crime Survey data also includes Wales. 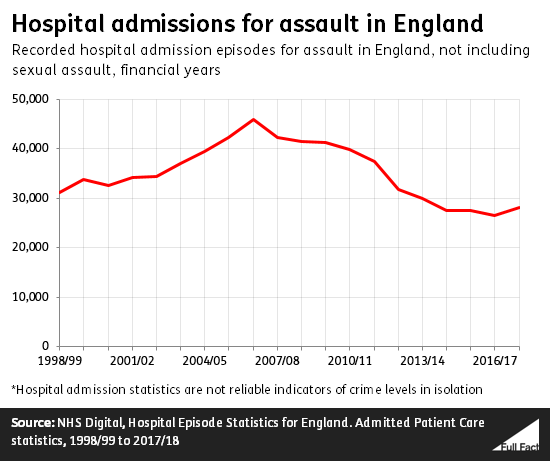 There’s also been separate research from Cardiff University into attendances at accident and emergency units in England and Wales as a whole. This research also took the growing population into account and found a falling trend in attendances due to violence between 2002 and 2017.

While these figures aren’t direct measures of crime trends, they do support the idea that violent crime today is less common than it used to be.

Both sources of figures are better indicators than police records. The Office for National Statistics (ONS) says that:

“For the population groups and offences it covers, the Crime Survey for England and Wales (CSEW) is the best source for assessing long-term trends in violent crime as the survey’s methodology has remained consistent over time.”

This statement sounds like it completely contradicts the previous one. But even though the police are recording more violent crimes than they ever have before, the weight of evidence suggests that it’s not because violent crime is getting more common—it’s just that the police have got better at recording it.

In fact, violent crime is believed to be one of the types of crime most affected by changes in police recording practices, particularly lower harm offences. Inspection reports into police forces also suggest some offences, like sexual offences, are still being under-recorded by forces.

In the year ending September 2018, the police recorded over 1.5 million violent crimes (called “violence against the person”). Those figures don’t include sexual offences—which are recorded separately—but sexual offences are also at their highest recorded levels.

The same is true if you take into account the rising population. In the mid-2000s, police records suggested the violent crime rate was about 16 incidents for every 1,000 people, compared to 26 per 1,000 in the year to September 2018.

Some kinds of violent crime are rising

Even though the police figures are generally unreliable, it’s still likely that some kinds of violent crime are rising at the moment.

Louise Haigh also specifies knife crime: claiming that since records began knife crime has never been as high as it is today. This claim is on more solid ground. Police recorded knife crimes in England and Wales are at their highest level of around 40,000 a year—although comparable records only go back to 2010.

Again, however, the police force figures are known to have been affected by improvements to recording practices in recent years, so we don’t have a certain picture of whether these are truly record levels.

Hospital admissions data also shows that admissions for assault by a sharp object are rising and at near-record levels.

The Crime Survey isn’t as helpful here. Knife crime is a relatively rare offence, and offences like that are difficult to pick up reliably in a survey.

So we don’t have enough evidence to say definitively whether knife crime is at record levels—but the claim is certainly backed up by stronger evidence than Ms Haigh’s claims on violence in general.