819 people were turned away across eight council areas during voter ID trials.

Across all ten trial areas in 2019, 1,968 people were turned away for not having the correct ID. Of those people, 740 did not return to vote.

One person was convicted for voter impersonation at the last election.

11 million people don’t have a passport or driving license.

This is correct for Great Britain according to research from 2015 – there isn’t a more up-to-date figure.

This is correct for Great Britain according to research from 2015 – there isn’t a more up-to-date figure. It refers to types of ID that would be valid as part of the government’s proposed voter ID scheme.

People turned away in just 8 council areas in trials: 819”

“3.5 million don’t have access to any photo ID. If you restrict that to passport or driving licence it’s 11 million.”

Over the weekend it was reported that the government plans to introduce a voter ID scheme, with details laid out in Monday’s Queen’s Speech. The plan would require voters to show an approved form of photographic ID in order to vote in a UK parliamentary election in Great Britain and local elections in England. Photographic ID is already required to vote in Northern Ireland.

This led to responses highlighting how few people are accused or convicted of impersonating someone else at a polling station—the offence which the voter ID scheme is meant to combat—compared to how many people have been prevented from voting due to pilot voter ID schemes the government has run.

These figures are broadly accurate. More than four times as many people were prevented from voting in May 2019 due to the voter ID pilot scheme, than have been accused of impersonating someone else at a polling station since 2010.

It has also been noted that millions of people do not have a form of photographic ID which would be valid if voter ID schemes were rolled out nationally. This is accurate—although under the government’s latest plans a free “electoral ID” would be made available.

How many people were prevented from voting?

The most recent trial of the voter ID scheme took place during the May 2019 local elections, across ten pilot areas in England. In some areas people had to show “a specified form of photo ID” in order to vote, while in others they also had the option of showing “two pieces of specified non-photo ID” (including things like bank statements and utility bills) or a poll card.

In total, 1,968 people were turned away for not having the correct ID. Of those people, 740 did not return to vote—38% of those who were turned away. Across the trial areas, the number of people affected represented between 0.03% and 0.7% of the total votes cast.

Actor and writer David Schneider claimed that 819 people were stopped from voting across eight areas, which is based on outdated information. It was reported shortly after the 2019 pilot scheme in May that across eight of the ten areas “819 people were turned away from polling stations and did not return”, and was based on findings from the Local Government Chronicle.

The Local Government Chronicle was reporting on initial estimates, and we’ve asked them why these found a higher number of people were unable to vote than is shown in the official data which was published later.

As we’ve written before, the government previously cited a rise in cases of “people pretending to be other people to steal their votes” as a key reason for the voter ID scheme.

But as we pointed out last time, that increase was only between two specific years (2014 and 2016), and more recent figures show a decline in the number of cases. The number of cases is also small.

In elections between 2010 and 2018, across the whole country, 181 people have been accused of impersonating someone else at a polling station. Most accusations resulted in no further action being taken.

That means that the number of people who didn’t return to cast a vote after being turned away during the 2019 trial—740 people—is over four times the number that have been accused of impersonating someone else at a polling station since 2010. 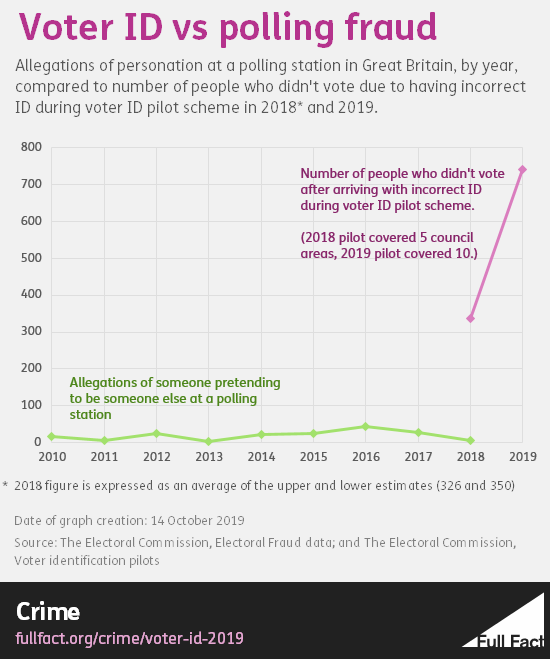 David Schneider is correct that only one person was convicted of voter personation at a polling station in 2017 (the year of the last general election). We’ve only seen evidence of one other conviction since 2010.

How many people don’t have ID?

Labour MP Cat Smith claimed that “3.5 million don’t have access to any photo ID. If you restrict that to passport or driving licence it’s 11 million.”

This correctly quotes research which is from 2015 but the most recent available. The Electoral Commission found that 3.5 million people in Great Britain (7.5% of the electorate) didn’t have a form of photo ID which would have been acceptable for a voter ID scheme. The same report found that 11 million people did not have a passport or driving license.

The report also recommended that a “Voter Card” should be made freely available in Great Britain, if the voter ID scheme was adopted.

Under the government’s latest plans, voters without an approved form of ID will be able to apply for a free “electoral ID” would be introduced alongside any voter ID scheme, so it’s likely that the number of voters unable to provide acceptable ID at a polling station would go down if a voter ID scheme were rolled out nationally.

We’ve previously looked in more detail at the wider impact voter ID schemes have had on turnout in other countries.