Has the government’s voter ID scheme been a success?

A pilot scheme where people had to show ID before voting was a success.

The scheme was piloted in five councils in May 2018, and the government said it was a “success”, as the “overwhelming majority” of voters had the right documents. Around twice as many people were blocked from voting in this pilot than there have been cases of voter fraud from 2010 to 2017 in the UK.

Allegations of people pretending to be other people to steal their votes doubled nationally between 2014 and 2016.

“The Tories' voter ID scheme just blocked 350 voters from getting to the polls. They think it’s a ‘success’. We think it’s a huge threat to our democracy.”

“Why are these local authorities piloting voter ID? A report from the Electoral Commission showed that allegations of people pretending to be other people to steal their votes doubled nationally between 2014 and 2016.”

In May 2018, a scheme was trialled in five councils in England where voters had to present ID at their polling station in order to be allowed to vote.

Overall, between 326 and 350 people across the five councils didn’t vote after arriving without the correct identification. The government called this a “success”, as the “overwhelming majority” of voters had the right documents. It said this proved that the scheme was a “reasonable and proportionate measure” to combat voter fraud at polling stations where an individual pretends to be someone else (known as “personation”).

In a single day across five councils, twice as many people didn’t vote due to having incorrect ID, as have been accused of personation in eight years in the whole of the UK. There have been 172 alleged cases of personation at a polling station between 2010 and 2017.

There is evidence, as we discuss below, to suggest that in other cases where a voter ID scheme has been in place, the number of people who do not vote after being turned away for not having the correct ID is higher than the alleged number of personation cases the UK has seen in the last eight years.

What is the ID scheme?

Five councils in England (Swindon, Watford, Gosport, Woking, and Bromely) piloted a new government voter ID scheme during the May local elections. This meant that voters had to take a form of identification with them in order to be able to vote.

The government wanted to trial different forms of voter ID systems, with the ultimate aim of introducing a single system across Great Britain (voters already have to present ID in Northern Ireland). The intention is to prevent “personation” at polling stations, which is when someone votes illegally in the name of someone else.

In explaining the scheme’s introduction, the government says that “A report from the Electoral Commission showed that allegations of people pretending to be other people to steal their votes doubled nationally between 2014 and 2016.”

What this doesn’t tell you is that the number of cases is extremely small. In 2014, there were 21 alleged cases of personation at a polling station, and in 2016 there were 45. What’s more the number actually fell again in 2017, to 28 cases. 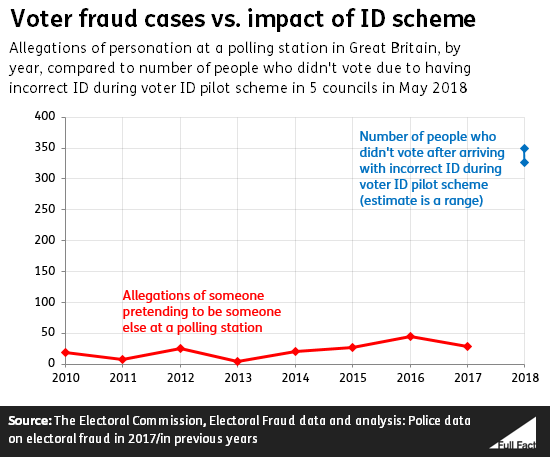 The UK Statistics Authority said that by isolating the years 2014 to 2016 the Cabinet Office did not put its figures in context, and that they “are not typical of the fuller time series”.

Just over 1,000 people across the five pilot councils were turned away on polling day in May this year, because they did not have the right identification. Of these, between 326 and 350 of them did not return to vote, that’s 31-34% of them.

The government called it a “success” as the “overwhelming majority” of voters had the right documents. It said this proved that the scheme was a “reasonable and proportionate measure”.

However, the pilot scheme across five councils prevented roughly twice as many people from voting in one day as there have been alleged cases of personation at polling stations across the UK from 2010 to 2017.

In four of the five trial areas, between 0.2% and 0.4% of voters who arrived at the polling station were turned away because they did not have the right ID and then did not return, and in Swindon it was 0.06%.

54 people were unable to vote in Gosport (which is also a parliamentary constituency). That may sound like a small number but it’s enough to swing an election.

That is more than the winning majority in 8 seats at the last general election. 0.4% of voters (the percentage who did not vote because of ID issues in Gosport) is greater than size of the majority in at least 14 constituencies at the last election.

The Electoral Commission also found that 2% of people who didn’t vote in the pilot areas did not do so because of the ID requirements. 3% of people in pilot areas said the scheme made them less likely to vote.

Overall, the Electoral Commission concluded that there is “very limited evidence” from the pilot schemes about whether it increased security and prevented electoral fraud. They recommend that the government should set out more specifically how pilot schemes for May 2019 will be run, work out exactly what ID will be deemed acceptable, and work with representative organisations to ensure that people with different needs are all equally able to vote.

A Bromley councillor reportedly told the council that the pilot scheme in Bromley cost the Home Office £200,000.

In recommending that a voter ID scheme be trialled, the Electoral Commission points to Northern Ireland, where an ID requirement for voters was introduced in 2002, as an example of a successful scheme.

The first time voter ID was used in Northern Ireland, around 3,500 people (less than 1%) arrived to vote without correct ID. The Commission says “Many of these voters returned later” with the correct ID. We don’t know how many did not return to vote. The Commission also found that 5% of non-voters (approximately 25,000 people) said not possessing the correct ID was a reason for not having voted.

The Commission estimated that approximately 3.5 million potential voters (7.5% of the electorate based on 2013 figures) would not have a form of photo ID with the security features they recommend. This figure could rise to six million or 11 million if only some of those forms of ID were allowed.

It also recognises that some groups are particularly vulnerable to not having the correct ID—for example, older people, people who report their ethnicity as “White: Gypsy or Irish traveller”, and people living in Wales are less likely to hold a passport.

In the three pilot schemes where a polling card wasn’t an accepted form of ID, the majority of people used a photo driving licence as their ID. A passport was the second-most popular, followed by some kind of concessionary travel card.

We corrected the graph in this piece, to show that the voter ID scheme took place in May 2018, rather than May 2017.

We've corrected this article to reflect the fact the UK Statistics Authority was referring to the Cabinet Office when it said figures on personation at polling stations in 2014 and 2016 “are not typical of the fuller time series”. We originally said this referred to the Electoral Commission, which was incorrect.

In one instance, we previously listed one of the five pilot areas as Surrey rather than Bromley.