What happened to violent crime in London since 2008?

Under Boris Johnson’s tenure as Mayor of London, the number of murders was under 100 a year for multiple years.

We haven’t seen figures to back this up. Available figures are for homicides, which include more than just murders. They only show one year when there were fewer than 100 murders.

Under Boris Johnson’s tenure as Mayor of London, the murder rate was cut by 50%.

Roughly correct. We only have figures for homicides, which include more than just murders. The homicide rate halved between 2007 and 2014, before ticking back up slightly.

“[Increasing stop and searches for weapons] was controversial, people said it was unfair, but by God it worked.

In recent years, the number of stop and searches has decreased dramatically, after reviews of the policy called for a more “fair and proportionate use of the power”.

When stop and search was used more widely, including from spring 2008-2011 when the Metropolitan Police initiated its Operation BLUNT 2 strategy, the number of arrests was higher, but the arrest rate was lower. But arrests aren’t the only thing which police bodies define as a ‘successful outcome’ for a stop and search.

Under Mr Johnson’s time as Mayor of London, the homicide rate halved, before rising again towards the end of his tenure. The number of homicides only dipped below 100 in 2014; not for multiple years.

We’ve asked Mr Johnson’s office for the source of these claims, but haven’t received a reply yet.

Searches and arrests down; arrest rates up

Even then, it’s difficult from these figures to judge how effective stop and searches are as it assumes that they’re only successful when they lead to arrests.

Her Majesty’s Inspectorate of Constabulary and Fire & Rescue Services notes that an arrest isn't necessarily a success, nor is a failure to uncover any wrongdoing necessarily a failure.

It’s also possible to look at whether stop and search acts as a deterrent to future crimes. A 2017 report found that areas in London with higher rates of stop and search had “very slightly lower than expected rates of crime in the following week or month” by analysing data from 2001-2014. The authors found the deterrent effect of increased stop and search on violent crime specifically was, at most, “negligible”.

Mr Johnson specifically referred to the success of Operation BLUNT 2, a Metropolitan Police initiative from 2009-2011 that tried to reduce knife crime by increasing stop and searches for weapons. A Home Office evaluation in 2016 found "that the greater use of weapons searches was not effective at the borough level for reducing crime.”

It’s correct that the homicide rate recorded by the Met Police halved between 2007 and 2014, during Mr Johnson’s time as mayor, before increasing slightly towards the end of his tenure.

Homicide figures are often used to describe the number of murders or the murder rate, but these figures include manslaughter and infanticide charges as well as murders. The available figures do not record murder, manslaughter and infanticide separately. We’ve asked Mr Johnson’s office for the source of these claims, but haven’t received a reply yet. We’ve assumed he was using the term “murder” and “homicide” interchangeably.

In the year before Mr Johnson became mayor (2007/08), there were 163 recorded homicides, or roughly 21 per million, using population estimates for the time. In 2014 the rate had reduced to 11 per million, down by about half, though this had ticked up slightly to 13 per million in the year from April 2015 to March 2016, Mr Johnson’s last year in office. 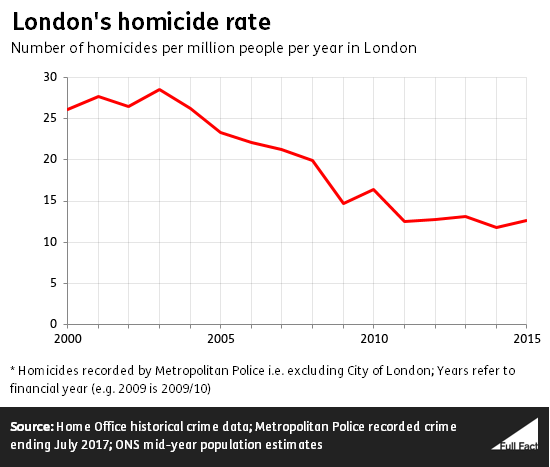 We haven’t found evidence that there were fewer than 100 murders for several years. Data from the Home Office shows there was no financial year in which the number of homicides fell below 100. As mentioned above, the number of murders specifically (not including manslaughter and infanticide) may have fallen below 100.

The Metropolitan Police also publishes homicide data on a monthly basis, which shows that in 2014 there were 92 homicides, the only year during Mr Johnson’s tenure when the total dipped below 100.

We have added the homicide figures for Mr Livingstone's first two years as mayor. These figures do not change the originally reported average of 25 per million during his time as mayor.