Almost half of young offenders are from black or ethnic minorities.

This is correct if you look at “young offenders” who end up with custodial sentences. 47% of young people responding to a survey of young offender institutions by HM Inspectorate of Prisons reported they were black, Asian or minority ethnic in 2015/16. Ministry of Justice figures paint a similar picture of all children in custody.

This is correct according to a report published by HM Inspectorate of Prisons on young offender institutions, though it’s not true of all young people who commit a crime. The majority of those sentenced do not end up in custody and the proportions of ethnicity vary throughout the system.

The report says that “just over half (53%) [of those in young offender institutions] said that they were from a white ethnic background with 47%, the highest rate recorded since 2001, identifying as black or minority ethnic”.

This is 47% of all children who responded to the survey. Last year, 86% of children in young offender institutions in England and Wales, or 632, answered it. We don’t know how children who weren’t surveyed would have responded.

Children who didn’t tick ‘white’ were counted as an ethnic minority.

As the graph below shows, 47% is the highest proportion since the survey began in 2001. 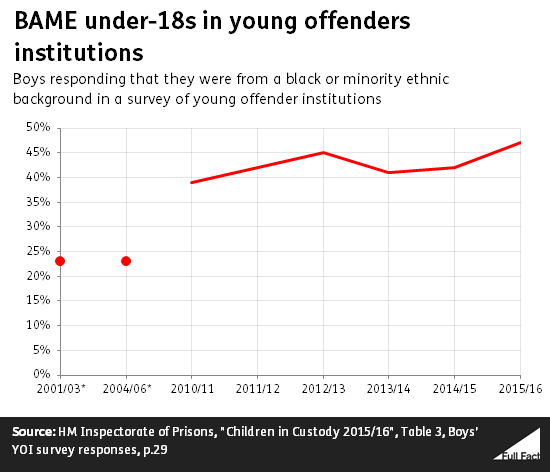 All of the children held in young offender institutions are boys. Girls are now held in secure training centres or secure children’s homes. There are around 1,000 children and young people held in these various youth custody facilities, the vast majority under 18.

Figures from the Ministry of Justice show that a similar proportion of under-18s across all these facilities are from ethnic minorities: around 45%, excluding unknowns, as of September 2016.  Again, that percentage has risen sharply: 10 years ago it was 25%.

There’s a much higher proportion of black and minority ethnic children in custody than in the overall population. 18% of 15 to 17-year-old boys identified as black, Asian or minority ethnic at the time of the 2011 census.

Emerging findings from the Lammy Review show that young males from ethnic minorities are also disproportionately likely to be arrested, charged, and prosecuted in the Crown Court (which is generally reserved for more serious offences) than their white peers.

There is no single easy answer to why minority ethnic groups are overrepresented in this way. It may in part be down to “disadvantage at earlier stages in their lives” as one study chaired by Baroness Young found in 2014.

But the report also found that factors like disproportionate use of stop and search contributed. Black, Asian and minority ethnic young people being more likely to deny an offence also came into play. Denying offences meant that they were less likely to just be cautioned. The report also raised concerns about “gang policy and the resulting police response which identifies young BAME people as a risk rather than in need”.

Ethnicity varies at different points in the criminal justice system

The proportion of black, Asian and minority ethnic boys varies at different points in the criminal justice system. For example, they accounted for 23% of all 10 to 17 year-olds arrested in 2014/15 compared to 39% of all those in “secure estate custody”. 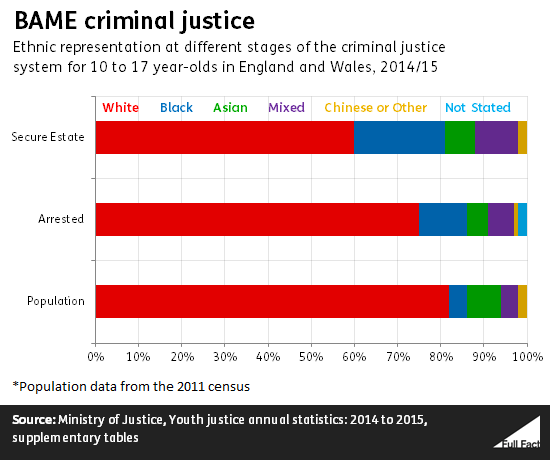 We updated this piece to include more information about the proportion of black, Asian and ethnic minority young people across the rest of the justice system, not just those in custody.