We factchecked their claims on junior doctors, deaths in hospitals at weekends, what the UK pays into the EU, and housing.

It’s correct that 98% of junior doctors who voted on the issue said they would be prepared to strike over the proposed new junior doctors’ contract.

Those who voted to strike represent somewhere between 46% and 52% of all junior doctors in England, including some not affected by the changes.

There’s a good deal of dispute over whether the new contract has enough safeguards to prevent overwork.

Doctors’ union the BMA argues that the changes mean employers no longer face financial penalties for overworking doctors, and this will risk “a return to dangerous working patterns”. That concern is shared by other doctors’ organisations.

NHS Employers argues that the penalties have had little effect on working hours. It says its analysis shows that credit for recent reductions in hours should go to the European Working Time Directive.

“What Jeremy Hunt has said in Parliament about 11,000 deaths each year which he attributes to junior doctors. I am so sad that you [fellow audience member] have taken that on from this government. It is not true... What he regarded as a weekend was a Friday, Saturday, Sunday, Monday, that is not a weekend.”—Audience member

In October, Health Secretary Jeremy Hunt incorrectly claimed that a study in the British Medical Journal had found there were 11,000 excess deaths caused by understaffing in hospitals at weekends. The study (£) had found 11,000 extra deaths in 2013/14 for patients who entered hospitals in England on Friday through to Monday, but was clear that “it is not possible to ascertain the extent to which these excess deaths may be preventable”.

We wrote to the Secretary of State to ask for a correction. The response from his office said:

“The Secretary of State’s statement gave a rough approximation of the BMJ article and also drew on this other evidence.”

The full response is available here.

Separately, the UK Statistics Authority responded to an anonymous complaint about the same claim. It said:

“We are speaking with Department of Health officials to ask that future references to this article are clear about the difference between implying a causality that the article does not demonstrate, and describing conclusions reached by authors.”

This wasn’t the first exchange we’d had with the government on its use of weekend death statistics. Before the 11,000 estimate had been published the Health Secretary had said evidence showed 6,000 excess deaths happen a year. But the evidence behind this hadn’t been published at the time. We referred the case to the Authority on the grounds that the public should be able to interrogate claims made by ministers.

In response the Department of Health said it would introduce new measures to ensure that claims that can’t be quickly substantiated won’t make it into ministerial speeches.

More likely to die from a stroke at the weekend?

“Obviously there is a debate about these figures. But I think there are lots of people who do believe these figures, which suggest that you are 20% more likely to die from a stroke if you have that stroke at the weekend.”—Nick Boles MP

Studies have found that stroke patients admitted to hospitals at weekends are at a greater risk of death.

People hospitalised on a Sunday after a stroke had an 11% risk of death within a week, compared to 9% for weekday patients, according to one study. That works out to a little above the 20% rise in risk referred to by Mr Boles.

More recent research, this time on patients in Wales, echoed those findings.

What the UK pays into the EU

“When we do well, when we are prosperous… we were hit with another massive bill for three billion [from the EU]. There you are, you’ve done very well, now pay us even more money. That makes no sense”—Audience member

Most of the UK’s contributions to the EU budget are based on the size of our economy—so-called ‘GNI-based’ contributions. These rose by around £2.5 billion (over €3 billion) between 2011 and 2013. This helped drive rises in the total amount we contributed to the EU.

Towards the end of 2014 it was also widely reported the UK faced a ‘surprise’ bill of about £1.7 billion, or over €2 billion, from the EU. These payments came about because of a new system of measuring the size of the UK economy.

This found that the economy performed better in the noughties than was previously estimated—so we had been effectively underpaying. The UK later negotiated some concessions on the payment.

This is including housing associations in all cases, which is not mentioned specifically within this claim.

Details aside, the general picture is clear: 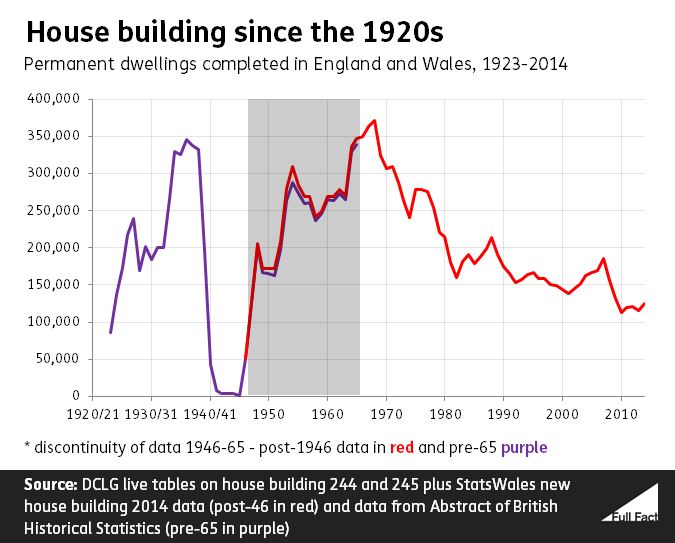 This graph is for England and Wales only, whereas the other figures we’ve given are for the whole of the UK. We don’t have all-UK figures going back as far as the 1920s.

Did Labour or the Conservatives build more council houses?

We’ve seen this claim several times before. It’s a bit like making a claim about music sales and only talking about vinyl.

It’s technically correct, but council house building makes up only a fraction of social homes overall. Most social housing is now built by housing associations.

In the last Parliament around 7,000 homes were built for local authorities in England, compared to 2,900 between elections in 1997 and 2010.

Including housing association homes, 129,000 social homes were built under the last government, compared to 251,000 under Labour.

We've calculated each government's record from the second quarter of the relevant year (1997 and 2010). 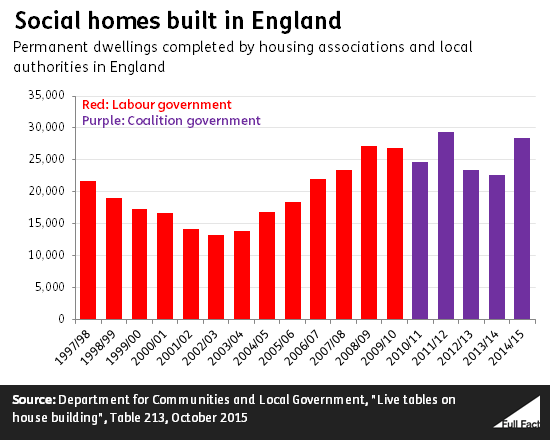