Are the Conservatives right about Labour’s tax plans?

The Labour Party plans to increase the basic rate of income tax to 25% to pay for social care for older people.

Incorrect. Labour hasn’t announced any plans to increase the basic rate of income tax. It’s said that it won’t raise income taxes for those earning less than £80,000. We’ve asked the Conservatives for more information.

“Jeremy Corbyn's plan to pay for elderly care: increasing the basic rate of income tax to 25p for millions of working people #GE2017”

The Labour manifesto 2017 says that “a Labour government will guarantee no rises in income tax for those earning below £80,000 a year”.

This means that the Labour Party wouldn’t increase the basic rate of income tax, as doing so makes anyone earning more than £11,500 pay more tax.

We’ve asked the Conservative Party for more information about its tweet.

During the Labour leadership campaign in 2015 Jeremy Corbyn did reference the fact that “the basic rate of income tax was 25 per cent a generation ago” in an article about the UK’s aging population. He added “if we want dignity for all in old age, then it has to be paid for… with funding options that can be discussed throughout the country in advance of 2020.”

This seems to be what the Conservatives were thinking of.  But we’ve not seen anything to suggest that Mr Corbyn has called for income tax to be raised to 25p then or since.

How does income tax work?

Different bits of your income are taxed at different rates. These bits are called “bands”, and each band has a name. So for example, the first band applies to your income from £0 to £11,500 and is called the “personal allowance”. Income that falls in the personal allowance band isn’t subject to income tax.

What is Labour’s plan?

Labour’s plan is to increase income tax for those earning more than £80,000 a year.

The Institute of Fiscal Studies (IFS) has looked at Labour’s income tax plans.

The red line in the IFS graph below shows the rate at which different bands of income would be taxed under the Labour proposals. There are no differences with the current system for the 98% of people earning less than £80,000. 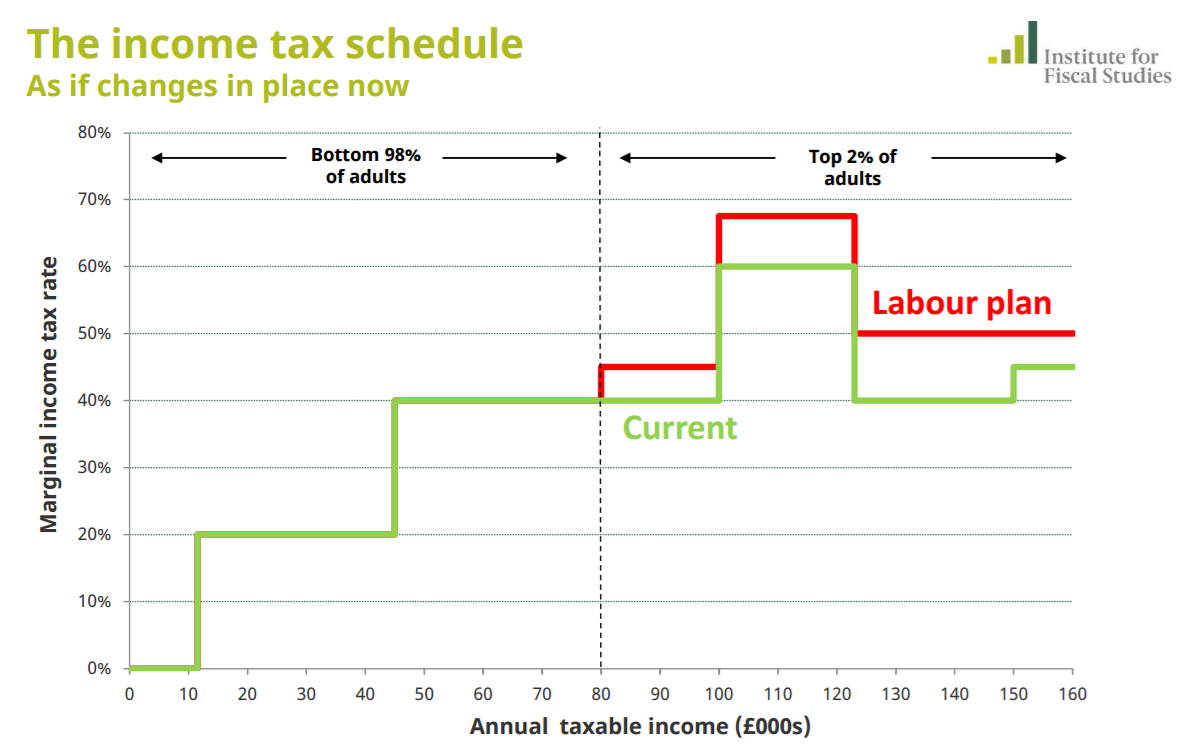 We've clarified our conclusion to read that Labour says it won't raise income taxes for those earning less than £80,000.