Are homes sold under Right to Buy being replaced?

These figure are correct for social homes sold and being built by local authorities in England.

These figures are correct in the case of social homes sold and being built by local authorities in England. Roughly 12,000 of them were sold through Right to Buy in 2014/15, while building started on about 2,000 in the same year.

Andrew Marr was challenging the Prime Minister on his government's record on social housing. The government has previously pointed to its record in replacing 'additional sales'—homes that were sold due to its policy changes to Right to Buy starting in 2012/13.

It said between 2012/13 and the start of 2015/16, more social homes were in the process of being added to local authority housing stock than were sold under the changes in 2012/13. What this doesn't tell us is about the availability of social housing—it only counts the replacement of these additional homes and doesn't tell us how many were built in the same areas as the homes sold.

These days most social homes are provided by housing associations, not local authorities. If you look at all social homes, about 17,000 were sold through Right to Buy in England last year and 25,000 were started. We focus in this article on local authority social housing, which is what both the figures referred to by Mr Marr and the government refer to.

There are a couple of different ways of counting new social homes, but each show about 2,000 houses in the process of being added to the local authority housing stock. 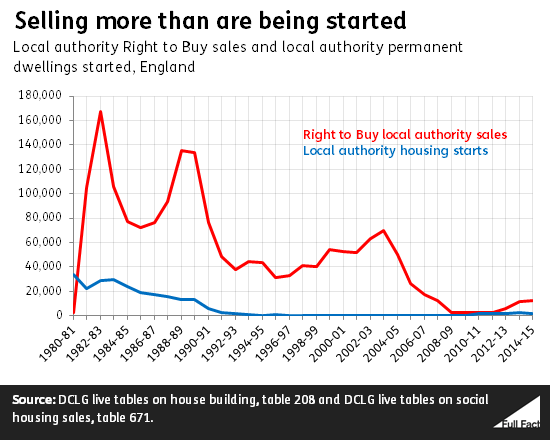 About 2,000 new local authority homes are recorded as being paid for by Right to Buy sales in 2014/15. That includes houses that were bought by authorities, or otherwise acquired by them, as well as those starting construction.

The statistical release also notes that some may have been funded by other sources, and so the figures are described as a "proxy" for the number of homes funded by Right to Buy sales.

In the same year, about 12,300 local authority homes were sold through Right to Buy.

The government's commitment is to replace certain homes sold

The government says there were about 3,100 additional homes sold that year. By the end of 2014/15, 3,400 homes had been started or acquired in England as a result of money generated through the Right to Buy scheme.

Housing magazine Inside Housing (£) has expressed reservations about the extent to which the government will be able to continue to meet this commitment.

For more information on Right to Buy, see our previous factcheck.