Are rail fares out of control?

The trains don’t run on time.

Rail fares are out of control.

“The prices are out of control, the trains don’t run on time”.

Train punctuality has been falling generally for the past five years, across several measures.

Around 87% of trains in Britain arrived at their destination on time in the year to 26 May 2018, according to one measure from Network Rail.

“On time” in this case doesn’t mean the exact time on the timetable though. This is based on the ‘public performance measure’ (or PPM) which is an industry standard throughout Europe. It counts “on time” to mean “trains arriving at their terminating station within five minutes for commuter services and within 10 minutes for long distance services” of the timetable agreed with Network Rail at 10pm the night before. 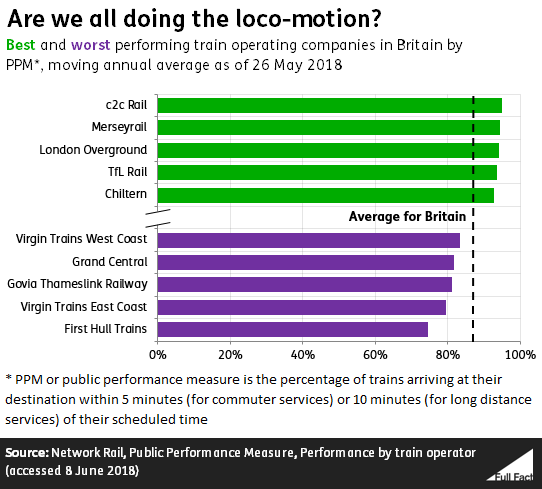 Another measure looks at whether a train arrives at its destination within 59 seconds of the scheduled time. This is know as ‘right-time performance’. Looked at this way around 62% of trains were on time in the year to 26 May 2018.

Neither measure will necessarily reflect your own experience of the railways—if you get off before a train reaches its final destination, for example, this leg isn’t picked up directly in these figures. There may also be variations depending on whether you travel at peak and off-peak times.

The worst performer using this measure was again First Hull Trains, only 22% of it’s trains arrived on time. The best performer was Arriva Trains Wales, with 83% of trains on time.

One other measure has shown a similar trend: over the last five years the proportion of trains that have been cancelled or ‘significantly late’ (usually when a service arrives over 30 minutes late) has generally been increasing, although this has fallen in the last year. In the year to May 2018 around 4% of trains in England and Wales were cancelled or significantly late.

The average ticket price in Britain increased by over 20%, once you factor in inflation, between 1995 and 2018.

Regulated standard class ticket fares can only increase by a certain amount each year (in 2018 it was 3.6%). This includes tickets like saver returns, standard returns and weekly season tickets as well as certain commuter fares in and around the London area.

In the short-term rail fares have fallen by 1% on average over the last year, once you factor in inflation.

Of course these figures will vary by train operator and across the country, so won’t reflect the experience of all passengers.