These figures seem to refer to all government income, not just taxes. On that basis it’s broadly correct, although income has been more than 40% of GDP at points.

“we are already taxed to broadly the historic limit of taxation in the economy. If you look at figures going back to the 1970s, the tax take to GDP varies between 34% and 38%. If you look at the Treasury red book we are heading towards the 38% level.”

The story Mr Rees-Mogg is telling seems to refer only to government income from taxes, although the figures he’s using seem to be for all government income, which includes things like profits from government-owned companies, or the sale of government assets. We're trying to get in touch with his office.

If he’s referring to all government income, he’s right to say the government’s income is about 36% of GDP—roughly £680 billion—which is forecast to rise to about 38% by the end of the decade.

And it’s true that the government’s total income has varied around 36-38% of GDP in recent years. 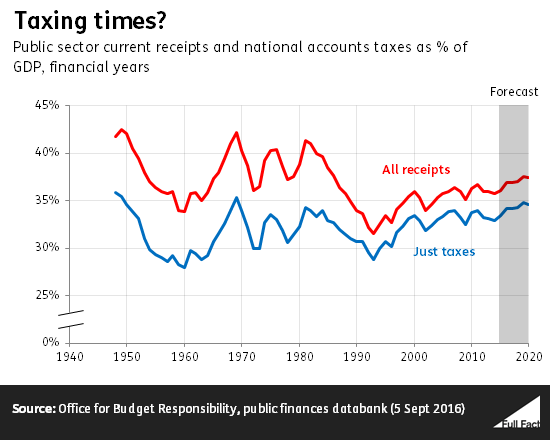 However, if we look back as far as the 1970s, as he suggests, the variation is much larger. There have been points where government income as a proportion of GDP has been higher than 40%.

38% government income as a proportion of GDP would be the highest since the 1980s, but not an unprecedented proportion. The government took in receipts worth over 40% of the economy at points in the 60s, 70s and 80s, and was at its peak in the post-war years in the 1940s.

That said, if we just look at taxes, current tax receipts as a proportion of GDP do seem to be close to their historic high-point.

A reader got in touch to point out that Mr Rees-Moggs use of the word “limit” was contentious, since it implied that it would not be possible for a government to tax any more than that. This is a fair point. In our factcheck, we interpreted “limit” to mean the “upper limit” of previous taxation levels, not the highest level of tax that’s possible.