Earlier this week we asked our Facebook followers for suggestions for a factcheck. Timothy Barson asked us "Has the real value of the minimum wage really dropped in past decades?". The minimum wage received quite a lot of attention during the election campaign (with a particular focus on what value it should take by 2020), so we thought it would be good to start with a classic.

In cash terms, the adult minimum wage has risen every year since its introduction. 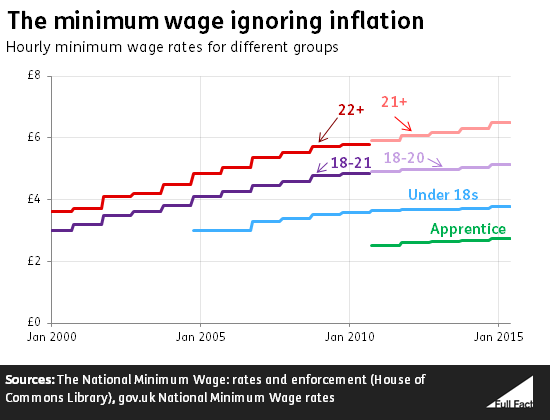 The exact amount of any increase depends on a number of things. The Low Pay Commission, which advises the government on the minimum wage, will generally look at the state of the economy before deciding what recommendations to make. This would mean taking into account things like the effect a rise might have on employment. 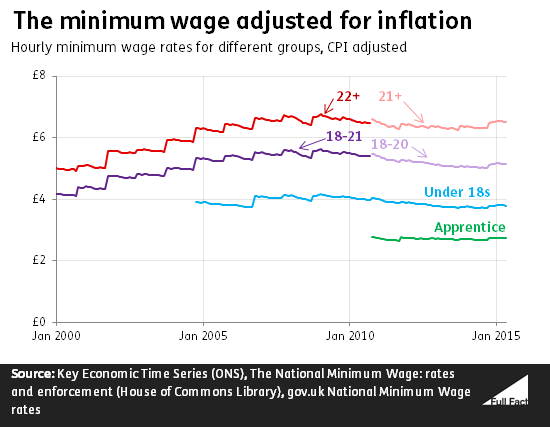 The minimum wage rates are usually updated in October, while prices change throughout the year. This is why the 'steps' in the real terms graph are sloped: the real value of the minimum wage jumps when it's updated, and is then usually eroded over the course of the year.

This also works the other way around: when inflation is negative and prices fall, the real value of the minimum wage rises.

This makes sense; the Low Pay Commission take into account the state of the economy when they make their recommendations, and when unemployment is rising and wages are falling, increases in the minimum wage are likely to have unwanted effects on employment.

This rate (for apprentices aged 16-18, or apprentices over 19 in their first year) is set below the minimum wage for people under the age of 18. The general reasoning is that an apprentice is given training both on and off the job, and the employer is compensated for this additional cost through lower wages.