What have bacon butties got to do with Brexit?

Supermarket prices for bacon have gone up, partly because of the UK’s vote to leave the EU.

This is incorrect. Wholesale prices for bacon products have risen in the past few months, partly due to a fall in the exchange rate after the UK voted to leave the EU. But the price paid in shops has fallen this year.

“Some shop suppliers have raised their prices by up to 38%, according to purchasing company Beacon, causing price increases at the till of up to 19%, as supermarkets pass the cost on to consumers.”

Did voting to leave the EU make bacon more expensive?

It did for wholesalers and retailers, but not for shoppers.

Wholesale pork prices have gone up this year

Wholesale prices have been increasing mainly because Chinese demand for pork imports has been increasing. The UK sold about 70% more pork to China in the year leading up to the referendum than it did the year before.

Chinese demand has been fuelled even more by the fall in the value of the pound compared to the Yuan after the UK voted to leave the EU. This made UK pork cheaper for Chinese buyers.

If Chinese buyers are able to offer higher prices, that pushes up wholesale prices for pig meat in the UK.

So wholesale bacon suppliers have raised their prices

Beacon, a food purchasing company, has told us that its wholesale suppliers have increased their prices for bacon products by 19% on average over the past three months.

The Guardian has reported that this means a 19% rise in the price of bacon at supermarket tills.

The price UK farmers get for a pig has gone up in the last few months, but the price shoppers pay for bacon has fallen so far this year. 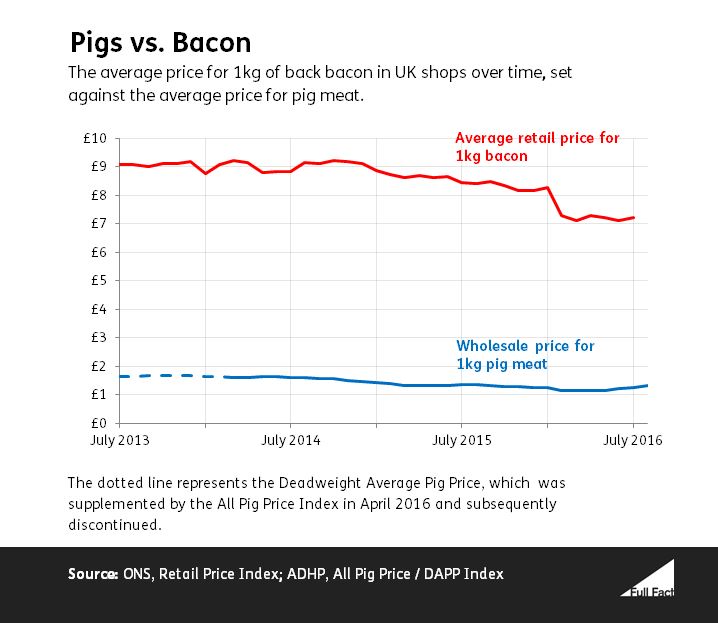 We contacted the Agriculture and Horticulture Development Board, a farming industry body. It said that retail prices for pork have been falling for the last few years and that this was mainly due to things like changes in consumer tastes and supermarket promotions.

Beacon also pointed out to us that it works with hospitality companies and restaurants, not supermarkets. So the prices charged by its suppliers could be different to those paid by supermarkets.

For now, your sandwich appears to be safe.