'Bedroom tax': the who, the what and the why

Some consider it a misnomer, because what is known as the 'bedroom tax' isn't actually a tax. Rather, it is a reduction in housing benefits as a proportion of rent, for those working-age claimants who have at least one spare bedroom in their accommodation.

Up until now, people living in social housing had no bedroom-based restrictions placed on the amount of housing benefit to which they were entitled, nor on the size of the accommodation that they could inhabit.

The 'bedroom tax' will come into force in April.

So, who will be affected?

In total, 660,000 claimants will be affected - all of them of working age (i.e., aged 16 to 64). This is approximately 31% of all working-age Housing Benefit claimants living in social housing.

One spare room will result in a 14% reduction in housing benefit, whilst two or more mean a 25% reduction in eligible rent. The great majority of households will lose £12 a week, while 120,000 claimants will be on average £22 worse off per week, according to the Department for Work and Pensions' (DWP) Impact Assessment:

Who is allowed what?

The Housing Benefit and Council Tax Benefit Circular states that the following will be entitled to one bedroom each: a couple, an adult aged 16 or over, two children of the same sex (aged under 16), two children aged under 10 regardless of sex, any other child under 16, and a non-resident carer providing overnight care.

This is roughly correct. ITV cites the Department for Work and Pension's Impact Assessment as the source for this figure, which confirms that out of a total of the 660,000 claimants affected, 420,000 (63%) report a disability recognised by the Disability Discrimination Act (replaced in April 2010 by the Equality Act).

Meanwhile 56% of total claimants - 370,000 - are working-age people affected by either a long-standing illness, infirmity or disability "that leads to significant difficulty with one or more areas" of their life.

The document is quick to point out that the impact should be mitigated by an extra £30 million of annual funding, which will be added to the Discretionary Housing Payment fund. This should allow local authorities to give extra help to, among others, disabled claimants and foster carers.

"Research for housing associations shows 42% of those affected already struggle financially. The rise in homelessness that will result won't just be devastating for those involved, it will cost: last year, the number of homeless families living in B&Bs soared by nearly half." Owen Jones, The Independent, February 3 2012

We contacted Owen Jones to find out what research underpins this finding. He pointed us to the Housing Futures Network research paper on "The impact of cutting housing benefit on underoccupiers in social housing", which is based on a survey of 452 households from across three housing associations: Affinity Sutton, Places for People and Riverside.

42% of those interviewed report struggling to manage financially "to some extent". 41% say they regularly run out of money before the end of the week or month. According to the same survey, 35% claim they had "very" or "quite likely" run into arrears. The graph below also charts other likely responses to the imminent reduction in Housing Benefit. 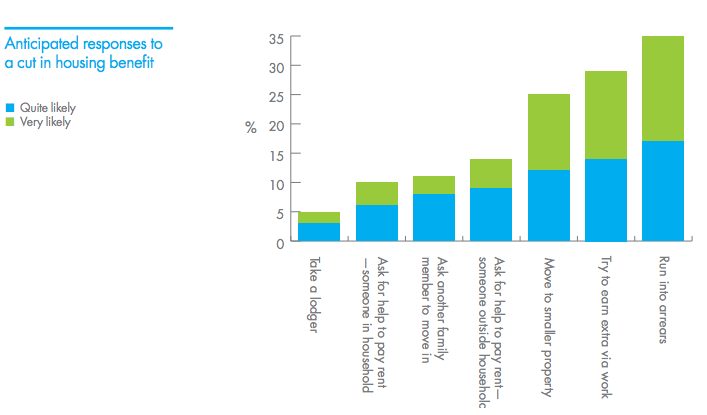 Helen Jones was right to flag this because, according to the Government's original plans, foster carers were meant to see a reduction in benefits if they kept one room spare for, as she said herself, emergency placements. Families who keep a spare room for their sons and daughters in the armed forces,  originally weren't exempt from the benefit reduction.

On March 12, however, the Government announced that families with foster carers and armed forces personnel will retain entitlement to what the Prime Minister dubbed the "spare bedroom subsidy". The written ministerial statement also adds that the changes will apply to tenants in both the social and private rented sectors.

Parents whose kids are at university will also be exempt, provided they are away for less than 52 weeks per year.

The main driver behind the policy is to contain expenditure on housing benefit; however Channel 4 news reported that the costs to the taxpayer for the implementation of this policy would exceed the benefits.

According to the Government's 2011 Impact Assessment, the reduction in housing benefits will result in the Government saving £930 million. A DWP spokesperson told us this figure is out-of-date, and has been adjusted in real terms to £505 million in 2013/14 and £540 million in 2014/15 for a total £1.045 billion.

The DWP also told us that "the total amounts that will be spent on implementation of the policy are still being determined as part of the process of assessing what the new burdens will be on local authorities." However, this Housing Benefits circular shows that local authorities have already received £14.8 million in additional funding from the DWP in order to support the costs of implementing welfare reform changes in 2012/13.