"Independent experts have suggested that Google is paying an effective tax rate on its UK profits of around 3%. Does the Prime Minister dispute that figure?"—Jeremy Corbyn

"I do dispute the figures the right hon. Gentleman gives. It is right that this is done independently by Her Majesty’s Revenue and Customs"—David Cameron

The 3% figure has been suggested by a few analyses. The debate comes down to how the amount of tax that Google owes has been calculated, and how others think it should be calculated.

The standard Corporation Tax rate of 20% is taken from the profits that companies make on their economic activity and assets in the UK. The government has said that this is different to the profits that they make on sales in the UK. For instance, a car manufacturing company based in the UK which sells most of its cars to America, should have those profits taxed in the UK (as the place of economic activity) rather than in America.

The 3% figure was arrived at by Professor Prem Sikka from the University of Essex by taking the amount of tax Google has either paid or agreed to pay for the past decade, and dividing it by what Google’s profits on its UK sales were roughly thought to be over that period.

Most of Google’s profits from its UK sales are documented as relating to Ireland and Bermuda rather than the UK, according to Professor Sikka. That’s partly why the 3% figure is lower than the 20% Corporation Tax rate.

We don’t have access to detailed figures on Google’s profits in the UK, so the calculations use sales in the UK and global profit margins as a basis for what UK profits might be.

Similar figures have been put together by Richard Murphy from the organisation Tax Research.

“So for example, if sales to UK customers are made from overseas or made using assets that are overseas, then the taxable profit is not here in the UK for corporation tax purposes.”

The debates around these tax rules are complex. We’ll be publishing more soon which seeks to explain this in more detail.

"As a percentage of GDP, corporation tax receipts are lower under this Government than under previous Governments."—Jeremy Corbyn

"[Corporation tax receipts] have actually gone up by 20% under this government."—David Cameron

Jeremy Corbyn is right to say that Corporation Tax receipts are lower now, as a proportion of GDP, than they have been.

Corporation Tax receipts were worth about 3.1% of GDP in the years before the financial crisis, compared to 2.3% in the 2014/15 financial year.

When you consider inflation, it works out as a real terms rise of about 6%. 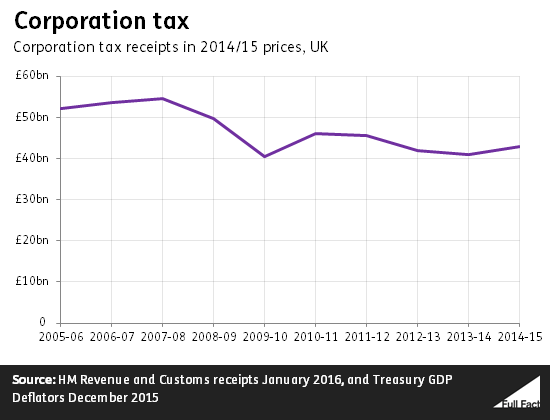 "This morning the Court of Appeal ruled that the bedroom tax is discriminatory... because of the bedroom tax’s impact on vulnerable individuals, including victims of domestic violence and disabled children."—Jeremy Corbyn

The Court of Appeal did say this morning, in a case brought against the government, that the so-called ‘bedroom tax’ discriminates against two particular groups of people.

In its defence of the case the government accepted that the policy discriminated against some victims of domestic violence and some disabled children. What the judges had to decide was whether that discrimination was justified, and therefore legal. They said that it wasn’t.

The decision only affects victims of domestic violence whose spare rooms have been adapted as a ‘panic space’ under the government’s Sanctuary Scheme, and families with disabled children who need carers to stay overnight.

The court’s ruling doesn’t make what the government calls ‘removal of the spare room subsidy’ illegal when it comes to other vulnerable people, or in general.

It’s also likely to go to the Supreme Court, which will hear a similar case in March.

"To date this year, he has borrowed over £74 billion to plug the gap... Is he now likely to breach his own deficit reduction target for the year by somewhere in the region of £9 billion?"—Margaret Ferrier MP

"The Chancellor, and the economic strategy the Government have pursued, has cut the deficit in half from the record level we inherited. Soon it will be down by two-thirds."—David Cameron

From the start of the current financial year to December, the government had borrowed around £74 billion. That was more than had been forecast for the whole financial year by the Office for Budget Responsibility, which said this suggests the deficit for the year could be around £9 billion higher than was expected.

That’s based on public sector net borrowing, which counts total revenue minus total expenditure and investment. It doesn’t adjust for the state of the economy, unlike the current budget measure.

Although it hasn’t happened as quickly as the government once expected, the deficit has fallen, as the Prime Minister says. This year the UK government’s overall budget deficit is forecast to be about half of what it was in the last full year before the Coalition took office. That’s still the case, roughly, if you take the OBR’s newer estimate of £78bn. Taken as a share of GDP it had already halved by last year (2014/15).

It’s forecast to be about £74 billion in 2015/16, compared to £153 billion in 2009/10, according to the Office for Budget Responsibility. The following year it is forecast to fall further, to £50 billion. That would be a drop of two-thirds, as the Prime Minister says.