Under Labour, UK steel production and employment in the industry halved.

Yes, if you compare 1997 to 2010, when the economy was in a slump. Production has been, broadly, in decline for decades.

Last week we took a look at a number of claims about the steel industry that appeared in Prime Minister's Questions.

We were able to verify the figures the Prime Minister used, but didn't have the time or space to go into the issue as fully as we'd have liked. And we didn't have access to the exact numbers used. We've now been provided with them by the International Steel Statistics
Bureau (ISSB).

They show that steel production and employment in the sector almost halved under the last Labour government. That's if you compare 1997 to 2010, when the sector and the wider economy were in a bit of a slump. Production has increased since then as the Prime Minister says, but neither output nor employment has recovered to 2008 levels.

These trends might not be that relevant to the current problems in the industry, which seem to be at least in part due to a rise in steel exports from China.

Production has been up and down since the ISSB's figures begin in 1972, but the broad trend has been downwards throughout the period.

In 2010 the industry was in the midst of a slump, which coincided with the recent recession. Production was at about 10 million tonnes or just under in each of the four years from 2009 to 2012, before rising again. It reached 12 million tonnes in 2014. 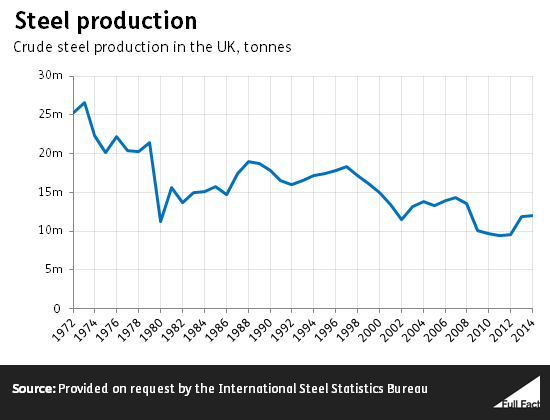 All this pales in comparison to employment a couple of decades beforehand—the ISSB says over 200,000 people were employed by the industry in 1972. 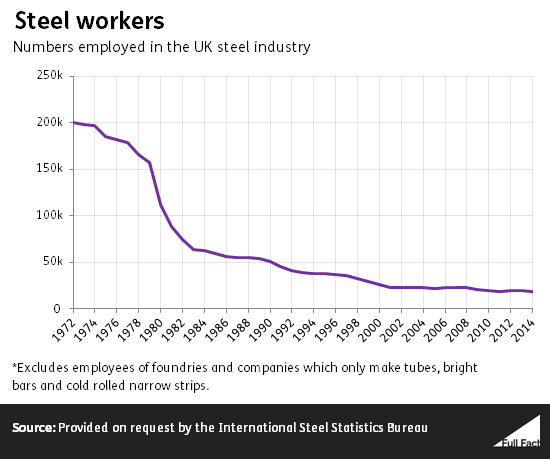 These figures don't include every worker in the steel industry. It doesn't count employees of foundries, for example, or companies that only make steel tubes. The ISSB told us that despite this the figures cover the "vast majority" of employees.

Looking at it in the long term, the steel industry's decline can be seen as part of the wider changes to the UK economy which have seen manufacturing's share of the economy fall, as the service sector accounts for more employment and output.

The House of Commons Library has gone into some of the problems faced by the UK steel industry more recently. The cost of labour and energy prices is higher for British producers than many of their global competitors.

And weaker economic growth in China and other economies means demand for steel there hasn't kept pace with growth in supply. China has responded by exporting its excess steel, which has pushed international prices down.

UK Steel says there's been an "unprecedented" increase in the amount of concrete reinforcing bars (rebar) being brought in from China. The European Commission has recently imposed a number of duties on metal products being 'dumped' by China on European markets—'dumping' in this sense involves exporting a product to the EU at prices lower than its normal value.