Disability benefits: spending on the rise?

Spending on disability benefits will be higher every year up to 2020 than it was in 2010.

Correct in cash terms. Taking inflation into account, there will still be a rise in spending, although not in each consecutive year.

Mr Robertson is referring to the planned reduction in Employment and Support Allowance for the ‘work related activity group’ of people who receive that benefit.

People in this group have been judged unable to work, but viewed as capable of returning to the workplace at some point in the future. From April 2017, new claimants will get £73.10 instead of the £102.15 per week that current claimants get. This is to bring the benefit in line with the Jobseeker's Allowance claimed by people who are unemployed and looking for work.

Figures compiled by the House of Commons Library show disability benefit spending in cash terms going from £17.1 billion in 2010/11 to £24.6 billion in 2020/21, rising each individual year in between.

But, in real terms, the increase over the decade is several billion smaller, and spending is forecast to drop back this financial year.

This won’t take into account any changes to disability benefits announced at today’s Autumn Statement. 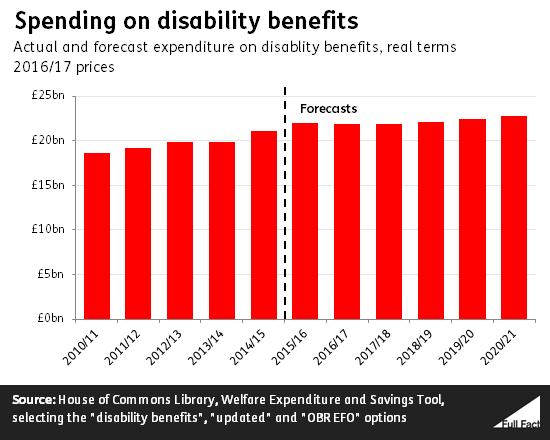