This isn’t correct. The highest earning 1% in the UK pay an estimated 28% of all income tax – not the total “tax burden”. This is close to a record level, but it isn’t quite the highest percentage ever.

"The top 1% of earners in this country are paying 28% of the tax burden. That is the highest percentage ever, under any Government."

The highest earning 1% in the UK pay an estimated 28% of all income tax – not the total “tax burden” as the Prime Minister states. This is close to a record level, but it isn’t quite the highest percentage ever – the top 1% paid an estimated 29% in 2015/16.

There aren’t any readily available figures for what proportion of all taxes the top 1% pays. Information is available on how much income tax the top 1% of earners pay from HM Revenue and Customs, but only stretching back to 1999.

The top 1% are projected to pay about 28% of income tax in 2017/18, so Theresa May’s claim would be roughly correct if talking just about this. The same figures though show top earners paid slightly more in 2015/16, at about 29% of income taxes. So it’s not correct to say this is a record percentage, in any case.

The last few years have still seen a high proportion of income taxes paid by the top 1%, by historical standards.  Since 1999 the percentage the top 1% of earners pay in income tax has risen in an almost consistent trend, across Labour, Coalition, and Conservative Governments. Back at the turn of the century they paid 21%. 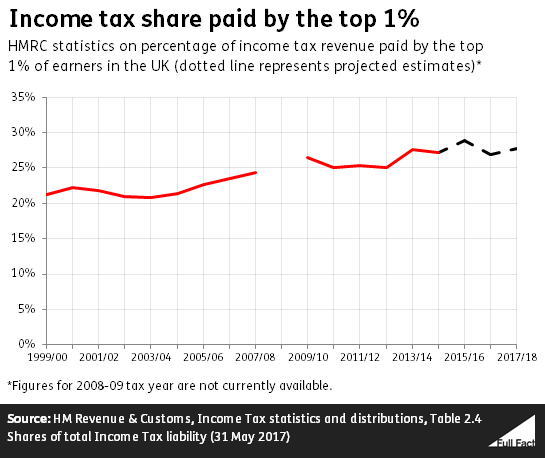 Income tax is only a fraction of the total tax take. Over three-quarters of the Government’s income comes from other taxes. So Theresa May’s claim is incorrect when considering all government taxes.

It is much more difficult to say what percentage of these other taxes the top 1% of earners pay. Households earning the top 10% of incomes pay about 27% in total of most direct and indirect taxes, according to Office of National Statistics (ONS) data. This figure has remained roughly constant since 2009/10.

These numbers at least indicate that the top 1% of households would be paying a smaller fraction of total taxes than 27%, so Mrs May’s claim is unlikely to be correct for the government’s total tax take.