Do you pay a higher tax rate than a millionaire?

Some people do pay higher tax rates than those earning £1m, but only when their income rises between certain amounts. The estimate of 800,000 people affected only applies to relatively high earners, but marginal tax rates affect low earners too.

Mostly, the more you earn the more tax you pay on your earnings. But there are quirks in the tax system where that isn't true.

800,000 is an estimate of how many people are affected by these kinds of quirks. We do not know the exact figure.

It depends on which taxes we are talking about

The income tax rate in the UK increases as you earn more. So how do so many people end up paying a higher rate than those earning £1m a year?

It’s because income tax is not the only tax affecting people’s income. Other “direct taxes” include national insurance contributions and council tax.

The estimate that 800,000 pay a higher tax rate than millionaires, produced by insurance firm Royal London, is based on a similar calculation of direct taxes, including both income tax and national insurance contributions, but not council tax.

It only applies to a small part of people's income

Royal London is only talking about specific cases where people's income increases, called marginal tax rates. 800,000 people do not pay a higher rate of tax overall than millionaires, but some do pay a higher rate on certain portions of their income.

This is because of other taxes which kick in above a certain income threshold. So an extra thousand pounds earned can be taxed at a very high rate. 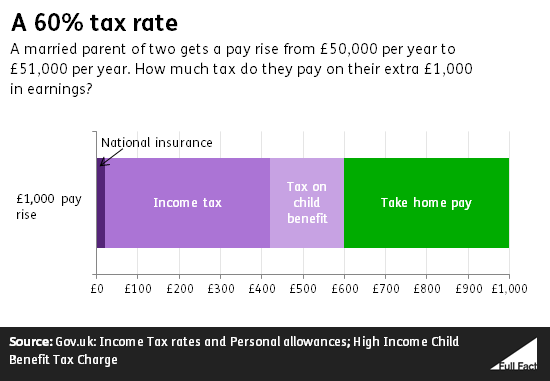 Royal London also looked at two more scenarios, where individuals lose either their tax-free personal allowance or tax-free pension contribution because they earn over a certain threshold. They correctly state that this can lead to marginal tax rates of 62% and 69.5% respectively.

It’s not only about high earners

Steve Webb, former pensions minister in the coalition government and now Director of Policy at Royal London, stated that “it is hard to believe that this is a sensible way to run a tax system”, calling on the Chancellor to make it “simpler, fairer and easier to understand”.

Royal London estimates 775,000 people are affected by the marginal tax rates they identify. This is not an exact figure, as it is made using certain assumptions applied to HMRC data on incomes.

Royal London also focused on high earners – only 10% of people earn enough to be affected by the tax on child benefit. But low earners can have high marginal tax rates too.

There is a debate over Universal Credit and how much it pays to work more, due to loss of benefits caused by going into work.

For a childless claimant without a disability, for every £1 earned in work (after tax) their Universal Credit benefit is reduced by 63p. This tapering of Universal Credit creates a marginal tax of 63% on net earnings.

Coupled with other direct taxes, some people could have a marginal tax rate of 75% on earnings under Universal Credit, or 80% if we include council tax. For students repaying tuition fees it could be 85% on certain parts, including council tax. 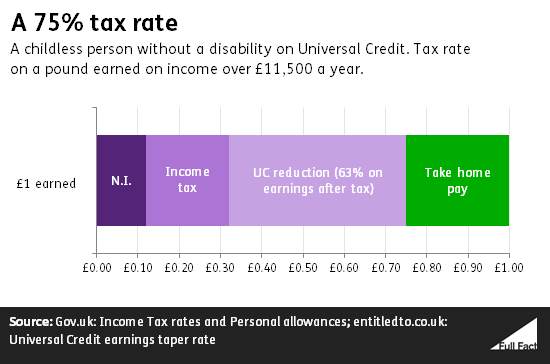