Does the Olympics account for a quarter of economic growth since the election?

"Around a quarter of the growth we've had under the Coalition is down to Labour's investment in the Olympics."

There has been plenty of discussion about the 'Olympic legacy' left by the London Games in the 14 months since they ended, but not much of it has considered the lasting impact on the UK economic growth figures.

But with the Chancellor claiming that an uptick in the GDP figures shows that the economy is "turning a corner", former Monetary Policy Committee member David Blanchflower urged caution in yesterday's Independent, writing that the 2012 Games might still be inflating the figures by as much as 25%.

Growth since the election

As we've seen before, one difficulty in tracking economic growth 'since the election' is that GDP is measured quarterly, and the May 2010 poll almost perfectly bisects the second quarter of data.

However if we take the first quarter of 2010 - the last full quarter for which the previous Labour government was in office - as our baseline, then the Coalition can claim that the economy has grown by approximately 4% on its watch. 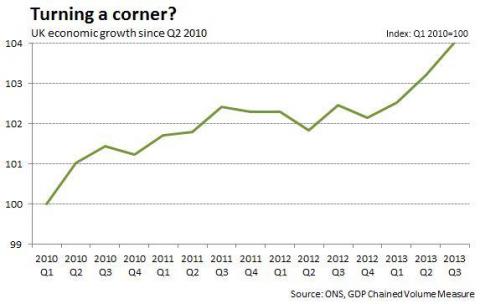 We got in touch with Professor Blanchflower to ask for a bit more detail to his claim that the Olympics was responsible for a quarter of this growth, and he told us that it was "based on the assumption that all growth in Q3 2012 and some more" was due to the Olympics. Specifically, he pointed to ticket sales and TV rights.

The ONS initially recorded growth of 1% in the third quarter of 2012, although this has since been revised down with the latest estimate suggesting that growth was closer to 0.6% in this period. If we accept Professor Blanchflower's assumption that all of this growth can be traced to the Olympic effect, then we could say that this alone accounts for 14% of the total growth under the Coalition.

Whether or not this assumtpion holds is difficult to say. The ONS has looked at the likely impact of the Olympics on that quarter's growth figures, and concluded that ticket sales accounted for 0.2 percentage points of the country's growth (all ticket sales were counted in Q3, regardless of when they were purchased).

However while the ONS notes that "there may have been other effects" on the economy from the Olympics, it says that these are "impossible to quantify", and also points out that much of the growth in Q3 2012 can actually be attributed to the "bounce back effect" generated by Q2 figures that were lower than usual due to the fact that an extra working day was lost to the Queen's Diamond Jubilee celebrations.

While there might not be official figures which we can turn to in order to bottom out the Olympic effect, there are, as we've seen before, a number of studies that have attempted to estimate the value of the Olympic legacy to the economy.

In particular, one piece of research published by the Government earlier this year suggested that the UK had seen £9.9 billion worth of extra trade and investment as a result of the Olympics in the year since it ended, the equivalent to around 0.6% of economic output. This, taken alongside ticket sales, would take us closer to the 1% addition to GDP required to account for a quarter of all growth since the election. Even this figure wouldn't account for Olympic-related spending before the Games, and any more benefits realised in the months since the report was published.

So while Professor Blanchflower's claim chimes with some estimates of the value of the 2012 London Olympic Games to the British economy, it's important to remember that it is an estimate based on a number of assumptions and with a certain amount of uncertainty attached, rather than the hard-and-fast fact that readers of the Independent might have understood it as.