It's a counter-intuitive argument but that's how the Telegraph has interpreted a report released this week by government advisory body, the Social Mobility and Child Poverty (SMCP) Commission. While the article said the report had found that workers would be "worse off" under Labour's proposed rise in the minimum wage, the report itself didn't actually make this claim.

What it does say is that if the minimum wage was to rise at the same rate that has been the long-term trend since 1999, then by 2020 it would actually be £8.23 an hour—more than the suggested £8 rate. The report concluded that Labour's proposal would be below average growth and: "Although welcome in terms of intent, this is not particularly ambitious".

The report's findings — an £8 minimum wage below trend

Workers would be "worse off" in relation to a hypothetical scenario where the minimum wage grew at the same average rate that it did from 1999 to the present day. But minimum wage rates are set according to prevailing economic circumstances and so there's no reason to expect them to follow past trends.

When the minimum wage was introduced  in 1999 the Low Pay Commission felt that it was better to start from a low rate and then have it increase than to start higher and risk raising unemployment. As such, the early growth rate of the minimum wage was higher than it would otherwise have been.

Inflation would also have to average over 3.5% per year until 2020 in order for workers on the minimum wage to be worse off in real terms. The Bank of England targets 2% inflation and current forecasts see the rate staying under 3.5% in the near future.

How the minimum wage is set

So any increase suggested by the Commission will be dependent on wider economic conditions.

Past periods of faster and slower growth can be seen clearly when the rate from 1999-2014 is split into pre- and-post-crisis periods. Up to October 2007 the minimum wage grew at an average of around 5% per year, while after that it was only 2% per year. 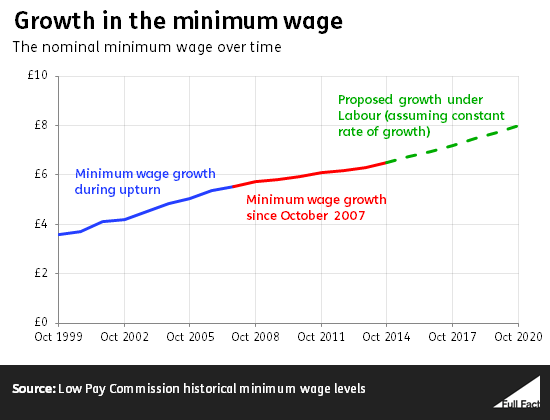