Fair fares? How much are season tickets increasing by?

That’s correct. “Regulated rail fares” from January 2019 in Great Britain will go up by July’s inflation (RPI) which is 3.2%. Average wages have increased by 2.4% over the past 12 months.

For the past 15 years, it’s been government policy to increase the share of rail operation paid for by passengers as opposed to subsidies (and by implication, taxpayers).

Which fares are going up?

The price rise applies to regulated rail fares which make up around 45% of all GB fares. They’re primarily for commuter trips.

These are regulated in order to “protect passengers in markets where train operators have a significant degree of market power”. Non-regulated fares are set by train operating companies.

Why are they going up?

When fare policy was revisited in 2003, the Strategic Rail Authority said one of their aims was to “to redress the balance between taxpayer and passenger, as increasing industry costs have so far been borne almost entirely by the taxpayer.”

That was reiterated by the Coalition government who said they wanted to relieve pressure on public spending .

In 2011/12, £8 billion of the rail industry’s income came from passengers and £4.3 billion came from the government (and therefore taxpayers). In 2016/17 passenger income went up to £9.5 billion while government income fell to £3.4 billion. So subsidies are decreasing as a share of rail funding. 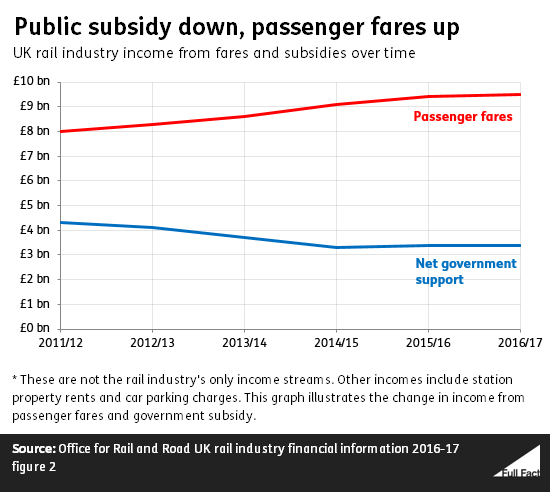 As of 2012, commuter fares (which make up a large proportion of regulated fares) did not receive any taxpayer subsidy. Taxpayer subsidies went into regional and long-distance routes.  (We’ve asked the Department for Transport whether this is still the case and are waiting for their response.) Around 56% of train trips in England in 2016 were for commuting.

As a side note, while taxpayers contribute over £3 billion towards the running of the railways, that’s relatively small by European standards. Research done for the Office for Rail and Road in 2012 found that railways in Britain are “more user financed” than in other European countries.

How much are fares going up by?

Regulated fares will be going up by the level of the Retail Prices Index (RPI) inflation measure for July – 3.2%.

There are various technical reasons for why the ONS don’t like RPI, but the main problem is that inflation measures are meant to measure the change in prices, and the ONS say that with RPI, “the evidence suggests it is likely to overstate inflation.”

That means that some people criticise government for using RPI to set regulated fares.

The Transport Secretary Chris Grayling has called for rail fare increases to be pegged to the Consumer Price Index (CPI), an official measure of inflation typically around 1% lower than RPI. He also says the same measure should be used for calculating wage rises in the industry.

Simply put, no. While regulated fares will increase by 3.2%, wages over the past 12 months have grown by 2.4%.

It is theoretically possible that the commuters as a group may have experienced a wage increase higher than that of the broader population, but we’ve not been able to find data that separates out commuters’ wages. (Rail passengers tend to have higher incomes, but this doesn’t tell you anything about how their wages are changing.)

Also, given that the aim of rail fare policy is to reduce taxpayer subsidy, we looked at whether tax cuts in recent years (primarily through the growth of the personal allowance) counterbalanced the fare rises. We found this makes very little difference to the calculations.