Fracking in the UK: half a century of gas supply?

"Latest estimates suggest that there's about 1,300 trillion cubic feet of shale gas lying underneath Britain at the moment — and that study only covers 11 counties. To put that in context, even if we extract just a tenth of that figure, that is still the equivalent of 51 years' gas supply." David Cameron, The Daily Telegraph, 12 August 2013

Today the Prime Minister stuck his neck out for shale gas.

Our estimated shale gas supply, he claims, could provide us with 51 years of gas supply.

After the Government announced in December 2012 that it would be lifting its moratorium on fracking, the British Geological Survey (BGS) surveyed the area of the Bowland Basin and beyond, which covers 11 counties in the North of England. 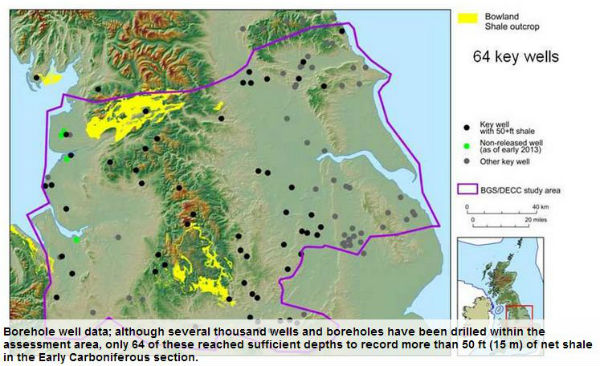 Their findings are reported in a Department of Energy and Climate Change paper, which was published at the end of June. The BGS found that in the area between Wrexham and Blackpool in the west, and Nottingham and Scarborough in the east there should be roughly 1,300 trillion cubic feet (tcf) of shale gas. Or, more specifically:

This chimes with the figure cited by the Prime Minister, however, crucially this "represents the gas that we think is present, but not the gas that might be possible to extract," which is known as the reserve estimate.

The resource estimate is the total amount of gas estimated to be underground.

This is not the same as the amount of gas that might be possible to extract, which is known as the potentially (or technically) recoverable resource. A Parliamentary POSTbox on shale gas potential assumes that the UK would present similar recovery factors to those seen in the US, which ranged from 8-20%.

The proportion of gas that it may be possible to extract is, as the BGS points out, unknown. It's dependent upon a number of economic, geological and social factors that will prevail at each operation, such as how easy it is to access the site, what infrastructure is in place and whether or not the area is densely populated.

This is why Mr. Cameron felt obliged to point out that we may only be able to "extract just a tenth of that figure". And even that is speculation at this point.

How did Number 10 come up with these estimates? Commenting on the findings in the Guardian last month, Peter Styles, professor of applied and environmental geophysics at Keele University, said the UK's shale gas reserves could supply the country for 25 years:

"We still need to extract it and that is the next trick, but if we only get 10% that will be around 25 years of UK gas supply and by then we need to have worked out how we are going to power the UK in the long term."

This is half of the Prime Minister's estimates.

We spoke to Prof Styles who told us that:

"Currently the country uses around 3 trillion cubic feet per year of natural gas reserves. Given that increased supply could lead to increased usage, I believe that the country could consume 4, maybe 5 trillion cubic feet of shale gas per year into the next decades. Based on this, I have estimated that this would translate into at least 25 years' gas supply although it may perhaps be much more."

Based on this, the Prime Minister estimates that if we extracted a tenth of the estimated 1,300 tcf of shale gas resources, that would translate into 51 years of gas supply. That is the equivalent of 2.5 tcf of annual usage.

This is of course, assuming that our current consumption levels remain constant for the next 51 years. However this seems unlikely. Population growth, the changing price of oil and the changing costs in fracking technology are all factors which can be reasonably expected to influence these levels.

Currently government projections only go up to 2030, when natural gas demand is estimated to amount to 78.8 billion cubic meters, more than current levels. Though the difference isn't too stark, these projections are somewhat at odds with the Prime Minister's estimates.

The BGS on the other hand hasn't estimated how long our shale gas reserves might last. They have after all said that the UK's extractable reserves are still an unknown.

To find out more on shale gas extraction read our factsheet on fracking.